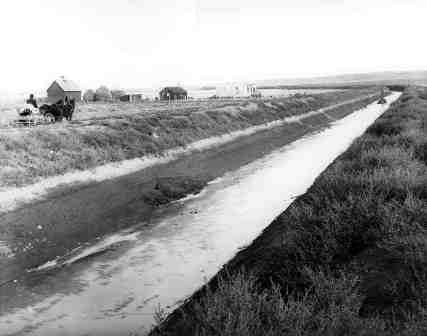 Huntley Project Irrigation Canal when it first started around 1907.

One of Montana’s irrigation systems that was badly damaged during the 2011 floods is getting the $1.7 million grant for repairs awarded to the Huntley Project Irrigation District.  Farmers will still be paying about $5.00 more an acre to irrigate this year even with the Federal government help, according to an anonymous farmer.  The funds are a help but the farmers and mainly consumers will still be paying to make up the difference on the loan amount that was also awarded.

This money was a relief as FEMA initially rejected the district’s request for the repair money, but reconsidered at the urging of Montana officials including U.S. Rep. Denny Rehberg, Senators Baucus and Tester.

Floods last spring along Pryor Creek east of Billings damaged about 200 feet of the 32-mile system run by the Huntley Project Irrigation District. The system serves about 800 crop producers in Yellowstone Valley area.

Dale Bilyeu said that they are 3/4 of the way done and he didn’t think they’d be this far done but are in the completion stage due to good weather.

More importantly, the canal should be fully operational when farmers begin looking for irrigation water this spring, Bilyeu said. Huntley farmers begin drawing water diverted from the Yellowstone sometime in April or May.

The headgates to the Huntley Irrigation District and Canal are set to open the week of April 15th, 2012.  It will be a time to start testing the work that was done to repair the canal at the Pryor Creek area. The Highway crossing the bridge will be completed and paved the week of April 29.

Upsteam about 7 miles, the Lockwood Irrigation District also recieved damages for thier dike on the Yellowstone River near billings but they are near completion on thier repair as well.  They are still waiting for FEMA to help with 75% of the repair as well.