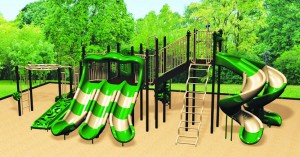 HUNTLEY – Big plans with a big price tag are in the works to bring new playground equipment to Barkemeyer Park.

Pam Gabel, owner of the Blue Cat Bar & Grill, is organizing an effort to raise nearly $30,000 to purchase two modern play structures for children 2 to 12. The existing equipment, a swing set, slide, merry-go-round and teeter-totter, was donated from Huntley Project School in the 1960s.

“Our goal is to provide the children of our community and all that visit our park with a brand new playground,” Gabel said.

And she wants it done this summer. The order for the equipment must be made by May 31 to get a half-price match on the cost from the equipment manufacturer, BYO Recreation.

“I’ve been wanting to do this for a long time,” said Steve Erb, president of the Huntley Community Club and park caretaker with his wife, Stacy. “I remember the night Pam told me how much this will cost, she said ‘you better sit down, it’s really expensive.’”

The estimate of $45,000 was no shock to Erb. “I’ve been looking at playground equipment for 10 years,” he said, with estimates nearing $90,000. That’s a daunting amount for the Huntley Community Club, which holds an annual fundraiser to pay for upkeep and maintenance of the 55-year-old park.

With amounts that large, the half-price offer is worth hustling for to meet the May 31 deadline.

“It will be flat awesome if we can get it done,” said Erb. 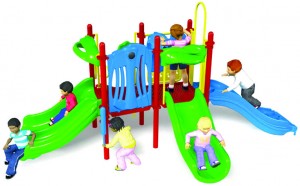 Fundraising began last year with a golf tournament that raised about $1,500. With that, two spring-riders were purchased, ridable plastic animals mounted on a spring. With the cost of such equipment and with only one small fundraiser a year, Gabel was frustrated that it would take forever to raise enough money to really make a difference in the park.

This year, bigger plans are in the works. On Saturday, July 14, the same weekend as Homesteader Days, the first annual “Market Mania” is planned with vendors offering arts, crafts, gifts, clothing and food and a silent auction. It will take place outdoors in the park. All proceeds will go into the playground fund.

Gabel’s daughter, Andrea Duke, is helping handle calls from vendors and they are getting a good level of interest. They sent out 165 letters to potential vendors for the one-day event. There will likely be increased traffic that day from people on their way to or from Homesteader Days, Gabel said, and they hope to have them stop in Huntley to check out the market.

Gabel has also contacted upwards of 60 owners of local businesses and some who live in the Huntley Project area and have businesses in Billings.

In addition to $30,000 for the play structures, additional funds are needed for a safe surface underneath them, edging to contain the rubbery surface product, and new benches and tables. Also planned are work days to get the items installed; Gabel is hoping for volunteer labor for that.

The existing play structures, with the exception of the recently installed blue jungle gym, would be removed and the new ones would be installed near that location. Last week, they placed blue-flagged stakes in the park to mark the irrigation pipes that are used to water the park and two other stakes mark the location where the spring-riders, a frog and a pony, will be installed.

Although it’s impossible to keep records on the number of people who use Barkemeyer Park, Erb said, “It’s amazing to me the variety of events that park hosts. It’s used for family reunion, sports, birthday parties, weddings, funerals, church services, class reunions, and so on,” plus people who just stop by to let their kids play.

“Everybody uses that park,” Gabel said. “It would be nice to have safe, fun things for the kids to do.”

The new play structures are less likely to hurt kids, Erb said. They are made of hard, smooth plastic and don’t have the pinch points that the older equipment does, nor the wood that splinters, he said. The new equipment is not quite as tall either; the fall height on the larger structure is eight feet and on the smaller one, under three feet.

A surface of ground tires would provide for a softer landing if a child does fall. Erb has been researching the rubber surface options, including a trip to the park at Lake Elmo, which uses the material. The footprint required for the larger structure is about 40 feet by 51 feet and for the smaller one, about 30 feet by 32 feet. Erb’s estimate of the cost of the rubber surfacing and other accessories is about $10,000.

The time is now to donate, as the deadline to order the half-price equipment is about a month away, Gabel said.

Donations are being accepted in any amount. Those that donate $500 or more would get their names engraved on a plaque for display in the park.  Other donations will be acknowledged with a public thank-you.

Checks can be made payable to Barkemeyer Park and dropped off at the Blue Cat in Huntley or mailed to 561 West G, Huntley.

Anyone with questions can contact Gabel or Erb, or attend the Barkemeyer Park annual meeting, set for Monday, April 30, at 7 p.m. at the YVEC hospitality room.