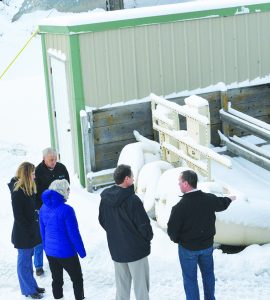 LOCKWOOD — Replacing a raw water pump station for the Lockwood Water and Sewer Dsitrict is exactly the kind of improvement Gov. Steve Bullock is hoping to make through infrastructure funding proposed through House Bill 14.

On Wednesday, the governor toured the district’s water treatment plant on the banks of the Yellowstone River near Interstate 90.

At the site, Mike Ariztia, the district’s manager, pointed out pumps that draw water from the river, which is then treated and supplied to the district’s 6,000-plus customers.

The problem is, he said, the pumps were installed at an angle and need constant maintenance and repair that costs the district around $50,000 per year.

“Realistically, you want the pumps vertical,” Ariztia said. A couple of years ago, two pumps went out at the same time and the district used Lockwood Irrigation District equipment to get water to customers, he said.

Ariztia told the governor that he hopes the infrastructure bill comes through the Legislature. A previous attempt died in waning days of the 2015 session.

“We’re hoping to start construction sometime in the latter part of this year,” said Ariztia.

Jill Cook of Morrison Maierle Inc. told Bullock the district has several projects in the works, all with an eye to the future growth of the community and the water-sewer system.

“All the projects are looking forward,” she said.