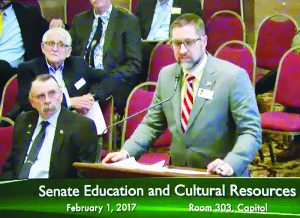 Originally published in the Yellowstone County News print edition on 2/3/17.

HELENA — Students, parents and school officials urged a Senate committee on Wednesday to support a bill that would allow school districts, including Lockwood, to create high schools.

That would allow Lockwood, for example, to begin budgeting and planning to build a high school estimated to enroll enough students to become a Class A school.

No one opposed the bill in testimony on Wednesday. The Senate Education and Cultural Resources Committee had not taken any action on the bill as of presstime Wednesday.

Chad Hanson, a father of a 7-year-old Lockwood student who hopes to someday graduate from Lockwood High School and a member of the community’s education committee, told the committee, whose hearing was broadcast on the Internet, that the goal of the proposed legislation is to help communities support their own students.

“We’d like a voice in deciding what’s best for our kids,” Hanson said.

Lockwood Superintendent Tobin Novasio said he believes the current version of the bill, which was reworked after narrowly failing in the 2015 session as Senate Bill 107, is “ready for…”   Read full article by subscribing to the Online Newspaper here.