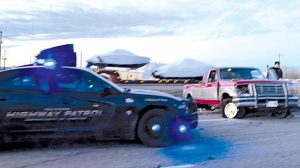 On Monday, November 29 at approximately 4:45 p.m., Montana Highway Patrol troopers threw spike strips in front of the pickup they were chasing along Interstate 90 near Lockwood. The chase ended just before the interchange of Interstates 90 and 94. (Tana McNiven photo)

A hit-and-run crash in Billings led officers on a high-speed chase along Interstate 90, in which a “pit maneuver” brought the incident to a halt just outside Lockwood on Monday, Nov. 28.

Captain Kyle Hayter, with Montana Highway Patrol (MHP), said Monday around 4:30 pm troopers became involved in the pursuit of a 1997 Ford F-150 after it was allegedly involved in a hit-and-run crash, from which it fled the scene.

Hayter said a Sheriff’s deputy tried to use spike strips to disable the truck;  however, this was unsuccessful as “the suspect vehicle crashed into the deputy’s car.” No injuries were reported from that particular part of the chase.

MHP troopers used a “pit maneuver” which stopped the truck near the split between I-90 and Interstate 94 at 4:45 pm. This demobilization technique Hayter described as one where officers “tap the rear of the vehicle and make it spin out.”