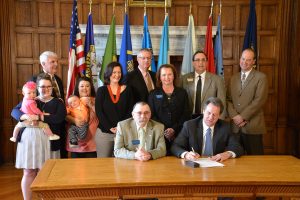 LOCKWOOD — After so many attempts, it’s a little hard for Tobin Novasio to believe that a new law will allow Lockwood residents to consider building a high school in their community.

“It’s a little overwhelming, to be honest,” Novasio said, but he’s heard quite a bit of positive feedback, especially in the later days of the session when it appeared that Senate Bill 139 would go through this time.

Gov. Steve Bullock signed the bill on Monday in Helena. The new law, sponsored by Sen. Duane Ankney, R-Colstrip and carried in the house by Rep. Sue Vinton, R-Lockwood, ends a moratorium on creating new high school districts and allows districts with more than 1,000 students to ask voters for approval to build a high school.

“It’s a big win for local control in Montana,” said Novasio on Wednesday. “We’re excited about it.”

He said Lockwood School representatives will “take the pulse of the community,” possibly at a listening session later this year. The impetus for a new school has to come from the community, he said.

The work up to this point focused on creating the opportunity for new schools, he said. Now the focus will shift to whether that school will materialize.

“It was mostly our desire to remove that obstacle,” the moratorium on new high schools, Riehl said. “There’s still a lot of effort needed.”

“It was a huge relief to hear that he signed it,” said Chad Hanson of GreatWest Engineering, a Lockwood parent who testified in support of the bill in Helena.

He cited bipartisan support as a key difference from previous sessions.

Riehl said he appreciate all the work poured in to this point by Novasio, Ankney and Vinton, as well as locals who drove to Helena to lobby on behalf of the bill or speak at hearings.

If voters approve building a new school, Novasio pointed out, there are many… Read full story in Print edition of Yellowstone County News.