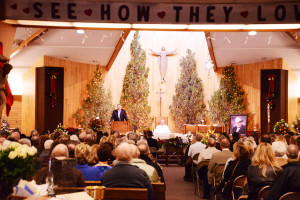 by Judy Killen-Originally published in the Yellowstone County News

SHEPHERD — People across Yellowstone County this week remembered Pat Goggins as a shrewd businessman, livestock auction pioneer and friend who was always generous, especially to people who needed it most.

Goggins, who owned PAYS and Billings Livestock auction companies and the Western Ag Reporter as well as several ranches and a real estate company, died Dec. 31. He was 85.

People came from across Montana, Idaho, Colorado and Wyoming for the funeral.

“This is the day I’ve been kind of dreading for a long time,” Rev. Reichling said. “But there’s joy in my heart because he was such a strong believer.”

Reichling knew Goggins well, both as a faithful parishioner and as a family friend, attending holiday celebrations and summer picnics hosted by the Goggins family.

Then there were the road trips. Goggins consigned him to a trip to his Diamond Ring Ranch in Custer County near Miles City a few years ago. After being waved off by a highway patrolman after a speeding stop, they arrived at the ranch where Goggins asked Reichling to bless the fields and livestock and pray for rain. He asked Reich to sprinkle holy water over a dry creek bed.

A similar trip to Goggins’ Pryor Creek Ranch ended with a similar blessing and prayer. Goggins leaped out of their vehicle and began “shouting to the heavens, ‘I believe it will happen!'”

Reichling said Goggins always carried the light of Christ given to his parents and godparents at his baptism as an infant.

“Indeed, he did, he carried the light of Jesus Christ” in his daily actions and his care for his family, employees and friends, Reichling said. “I’m sure Pat is just smiling down, seeing this wonderful crowd here.”

Reichling had never seen more people — or more flowers — in the church for a funeral.
Goggins brushed against death several times, Reichling noted, and received the Sacrament of the Last Rites — prayers given to a dying person — “A number of times, but he always bounced back.”

In fact once when Reichling administered the Last Rites, Goggins shouted “No! No!” 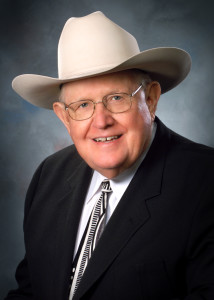 In his biography, “As I see It,” Goggins wrote that character is most important in a person, the only thing he can take “into the box.”

But Reichling said Goggins had several items with him: an old Irish blanket, the cremains of a beloved dog, photos of his baptism.

Goggins “shared his wealth,” Reichling said, not just the monetary kind. “It’s still alive and well, and it will increase.”

Ty Thompson, who has worked for the Goggins family for two decades, spoke eloquently about him.

“It’s a sad day because of its finality, but it is not a tragedy,” Thompson said. “We’re celebrating, not mourning.”

But he was given 16 more years, during which his grandchildren grew and great-grandchildren were born, his business interests expanded and he was chosen for Saddle and Sirloin, “a great, great honor.” He celebrated his birthday many more times with his brother Bob —born on the same day, six years ahead of Pat.

Goggins and his wife, Florence “Babe” Goggins, were a few days into their 65th year of marriage when he died on New Year’s Eve.

They met on a blind date that went somewhat awry, but worked out perfectly for Pat.

Thompson said the blind date involved Pat and his brother, and two women. When they went to pick up their dates, Pat ended up sitting in the car next to his brother’s date.

“Sparks flew and he closed the deal in a hurry,” Reichling said, to laughter from the congregation. They married two months later, the day after Christmas Day, and renewed their vows on their 60th anniversary five years ago.

Before the funeral, Becky Tescher Robison, who worked for Goggins from 1981 through 1993 as a reporter for Western Livestock Reporter and Agri-News and then as editor of Agri-News, told the Yellowstone County News that she loved working for Goggins, “an industrious, on-task businessman” who “had a fun gamesmanship quality that would readily surface if someone was betting a game, challenging a fact or even just selling raffle tickets. He always bought in.”

“All three weighed themselves on the cattle scale and the bet was on,” Robison said. “I only heard about it because someone said, tiptoe lightly in the office — Pat’s on a diet. Never did hear who won. But my guess was it was a pretty good competition.”

“Another time, an employee’s car was being towed away,” Robison said. “She was upset and Pat asked what the fuss was about. She was behind on her payments. He paid car payments and made very little about it. I heard about it but it was never mentioned again by anyone. Pat was generous like that.”

“He used his God-given talents to the fullest and it paid off in spades,” she said. And credit is due his wife, “who is rock-solid and kept the home fires burning while he traveled so much of their lives. She was with him in the tough times when money was scarce.”

“Pat Goggins is my idea of a great American,” said Commissioner John Ostlund. “He was red, white and blue. He had an interest in making America and Montana great. He was a man brimming with integrity.”

Goggins was one of the most “influential voices” for agriculture, said Commissioner Jim Reno.

Commissioner Bill Kennedy said Goggins helped upcoming generations of farmers and ranchers: he “has been a strong supporter of 4-H and agriculture for many, many years. He will be greatly missed. He used to be the auctioneer for the 4-H sales and he tried very hard to get the highest price for the 4-H kids at the fair. He would say to the buyers, ‘Can’t you do better than that?’ He cared for the kids.”

“Probably no one in Montana is as well-known as Pat Goggins in the rural communities, or has been as well-known for as long as he,” Pyburn said. “Growing up on a farm, the Western Livestock Reporter with Pat Goggins’ picture on the front was a staple of the coffee table in our living room, for as long as I could remember. Such was surely the case for every home of every farmstead throughout the state.”

In fact, Pyburn said, “Along Montana’s country roads ‘Pat Goggins’ was as familiar a term as ‘rural route.’

“His life was truly a ‘big deal’ to agriculture in Montana,” Pyburn said, “as a listing of his accomplishments readily attests. Few people can match it. Whether it was in publishing, real estate, as a livestock breeder, or a visionary when it came to technology, he led the way – and quite literally, when he spoke about agriculture, as he did on a weekly basis in his weekly column, ‘everyone listened.'”