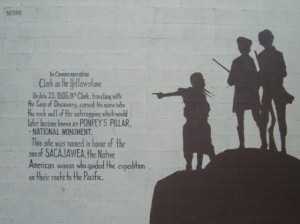 Founded in 1907, Pompey’s Pillar was built and named after the site of a famous natural landmark where William Clark inscribed his name on July 25, 1806 during his trip down the Yellowstone River. The landmark is a sandstone outcropping.

The village was planned as a railroad station within the Huntley Project, an irrigation project managed by the United States Bureau of Reclamation.

A Catholic church and a Union Congregational church once existed in the village. The Northern Pacific Railroad connected the settlement to Billings, about 29 miles southwest. A post office currently operates in the community.

Pompeys Pillar National Monument was created in 2001. The site is controlled by the Bureau of Land Management and supported by the Pompeys Pillar Historical Association (PPHA).

(1863) The first recorded observation of Captain Clark’s signature on Pompeys Pillar was by James Stuart, Montana pioneer and leader of a gold prospecting party down the Yellowstone valley.

(1873) Lt. Col. George Armstrong Custer’s troops were camped opposite the Pillar, and while the men were refreshing themselves with a swim, the Sioux Indians fired upon them.

(1875) Grant Marsh, Captain of the steamboat Josephine, recorded in his log that he saw Clark’s signature.

(1882) The Northern Pacific Railroad placed an iron grate over the signature as a means of protection. In 1954, the Foote family (former owners of the site) replaced the grate with the present brass and glass case.

(2001) Pompeys Pillar National Monument was established and placed under the management of the Secretary of the Interior through the Bureau of Land Management.

Pompeys Pillar is one of the most famous sandstone buttes in America. It bears the only remaining physical evidence of the Lewis and Clark Expedition, which appears on the trail today as it did 200 years ago. On the face of the 150-foot butte, Captain William Clark carved his name on July 25, 1806, during his return to the United States through the beautiful Yellowstone Valley.

Native Americans called the Pillar “the place where the mountain lion lies.” Some observers suggest that a sandstone formation, that is a part of the Pillar, which resembles a mountain lion’s head, is the reason for the name. Another theory cites live mountain lions being spotted in the area.

In November 1991, through the efforts of the Committee for the Preservation of Pompeys Pillar this natural historic landmark was purchased from private ownership.

The private owners also donated original J. K. Ralston paintings, other artwork, and a Lewis and Clark historical library to the public at the time of the acquisition.

A boardwalk leads to Capt. Clark’s signature and to the top of the Pillar. Trails lead visitors past a replica of Captain Clark’s canoes and to a view of the 670 mile-long Yellowstone River.

The Pompeys Pillar Historical Association, in conjunction with the Bureau of Land Management, hosts “Clark Days” the last weekend of July each year. River floaters, reenacting Captain Clark’s canoe voyage, arrive at the Pillar during the afternoon. A buffalo barbeque, entertainment, living history demonstrations and interpretive activities are scheduled for the event, which will be the last Saturday and Sunday in July.

The Pillar overlooks the Yellowstone River about 25 miles east of Billings, Montana. The area is easily accessible from Interstate 94, using exit 23, or from State Highway 312. The Pillar is a sandstone butte or mesa covering about 2 acres at its base and standing about 150 feet high. Because it is the only sandstone outcrop on the south side of the Yellowstone River for several miles in either direction, it has been a landmark for centuries.