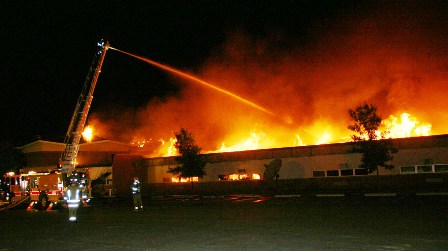 On Sept. 18, 2008, an early morning fire destroyed the Huntley Project high school building in Worden. The fire destroyed nine classrooms, the home economics room, the library and computer lab, three offices, the high school gym and the band room. The concession stand, school trophies and other memorabilia were also destroyed.

Early reports said the fire was “suspicious” in nature.  Yellowstone County deputies arrested four teens, all current or former Huntley Project students, in connection with the fire.  Court records say that the four teens broke into the school, damaged several doors and vandalized the chemistry room and other rooms, broke into a vending machine for snacks and took footballs before leaving the building. Court records say the teens later returned to the school and set fires in the chemistry room and an office.

After the fire, students returned to classes in modular buildings moved onto the school campus, which will be used, along with spare rooms in other buildings and around town, as classrooms until a new school can be built. The school and campus were insured for more than $6 million.

Students moved into the new Huntley Project High School and auditorium in the fall of 2011.  For 3 years, students had to attend school in modular trailers and buildings during the rebuilding of the school on the school campus grounds.

One of the many touching stories that kept the Huntley Project community together was the sense of rising together to succeed and working through the devestation of the school burning down.  In particular, the football team went through the season together to become the state champions in Class B State Football.  The following is a youtube video put together showing pictures of the fire as well as the football team to the tune of “We Rise Together”.