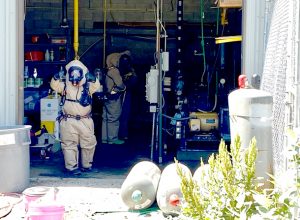 A thumbs up from one member of the HAZMAT team, signaling they’ve located and capped off the leak. (Courtesy photo)

A HAZMAT team was deployed and Two Moon Park was evacuated after an ammonia leak was discovered at Centennial Ice Arena in the Billings Heights on Thursday, July 21 at around 7:30 p.m. The bike path which runs behind the arena was also evacuated and shut down.

City of Billings public information officer, Victoria Hill, said it was the arena’s alarm system that detected the issue and alerted Billings Fire Department (BFD). She also said that the BFD HAZMAT team located the source of the leak, shut off the valves, and worked to ventilate the contaminated air out and toward the closed-off bike path.

Ammonia, which is commonly used to create ice and keep it cold, is a dangerously toxic chemical that will cause extreme irritation of the lungs and skin if a person is exposed to it.

However, according to BFD battalion chief Jason Lyon, there is only a small amount of ammonia stored inside the ice arena in the first place. For that reason, the leak and subsequent ventilation did not pose any significant risk of harm to anyone beyond the bike path, Lyon explained.