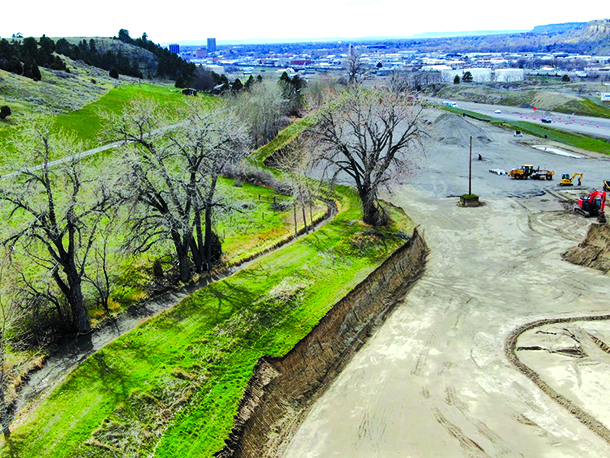 As irrigation season approaches, the Lockwood Irrigation District is worried about whether the irrigation canal will be ready. Construction of Camping World, adjacent to the canal has disturbed some of the berm that reinforces the ditch and District Board members are concerned about whether it will be repaired in time. (Jonathan McNiven photo)

Lockwood Irrigation has been informed that they are being awarded a $35,000 ARPA (American Rescue Plan Act) grant, according to Carl Peters, Irrigation District Manager. The grant falls short of the $400,000 requested, said Peters, which means that the district may not be able to go forward with their project.

The District is also dealing with problems involving the construction of Camping World at the end of Rosebud Lane.

Peters explained more about the ARPA grant saying that the board had intended to replace the spillway of the intake where the head gates are.  The Irrigation Board has not met since news of the proposed grant was announced so what course the board will take remains in limbo.

Peters also reported that the Irrigation District has been dealing with a problem that has occurred involving the ongoing construction of Camping World.  The construction crews of Jacon Constructors of Benton, Arkansas, have taken out about 19 feet of the canal berm.