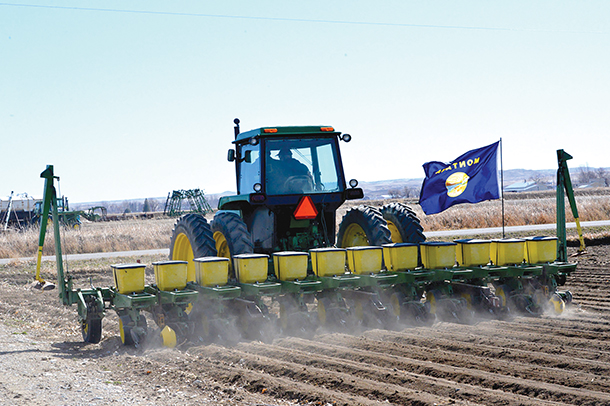 Montana Governor Greg Gianforte is seen here driving a John Deere Tractor Wednesday provided by Leroy and Sydney Gabel in planting for the early beet season at the Gabel Farm in Huntley. Greg Gabel is in the tractor cab assisting the Governor. (Jonathan McNiven Photo)

Montana Governor Greg Gianforte stopped in Billings and Huntley Wednesday to visit with local businesses while also promoting Agriculture week in Montana.  Gov. Gianforte said in a press release before traveling to Yellowstone County, “We’re recognizing the thousands of Montana farms and ranches that drive our state economy and feed our nation and the world.” 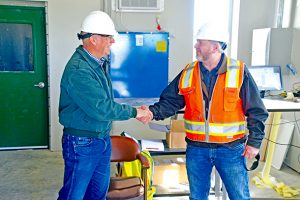 To celebrate National Agriculture Week, Governor Gianforte and first lady Susan visited the new Gavilon Grain elevator in Huntley as well as visited the Gabel farm that produces sugar beets.  Gianforte learned about the operations and process while also hearing the concerns and obstacles that limit the agricultural industry and the Gabel’s farm operation.  Topics of discussion included inflation, cost of materials, transportation, and regulations that slow the process for area farmers, ranchers and businesses.

“Agriculture is Montana’s number one industry, and during Montana Agriculture Week, we’re promoting and advocating for our producers as well as those who assist their work. We’re looking for new, innovative ways to support Montana’s farming and ranching families,” Gov. Gianforte said. “There’s no better way to do that than by sitting down with industry leaders to discuss what’s working, what’s a challenge, and how we can better partner to strengthen Montana ag.”

Huntley Project alumni Greg Gabel, who has returned home to farm after serving 20 years in the military, took Governor Gianforte for a ride in his 4440 John Deere tractor pulling a beet planter to allow the governor to plant some of the season’s first sugar beets, although a bit early.  Greg’s parents Leroy and Sydney Gabel were also able to explain the history of farming beets on the Gabel farm for four generations. Greg Gabel is now in the process of farming the land his grandparents farmed and is now learning the inner workings of running the farming business and said costs for materials have doubled already this year. 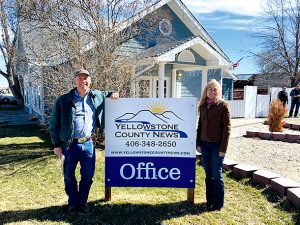 MT Governor Greg Gianforte and First Lady Susan Gianforte stop by the New location of the Yellowstone County News office for a surprise visit Wednesday. The last time the Gianforte’s visited YCN was about six years ago when the Yellowstone County News was a one room closet office space. More pictures from the Governors visit and drone images will be online due to time and space constraints. (Courtesy photo)

Governor Gianforte also visited Huntley’s Gavilon Grain Manager Terry Bartelt at their new facilities in Huntley learning about the products and process of how their business and product feeds the nation and beyond. The new grain elevator opened in the fall of 2021.  With a 750,000-bushel storage capacity and more than 1,500,000 bushel external storage, the grain elevator serves producers in Yellowstone County and throughout the region.  Manager Bartelt showed off the new grain elevator and the new integrated technology that allows the grain trucks to unload grain in a fast manner compared to how things were being done before.  Within two minutes, a truck can be unloaded.  In addition, the way that grain is stored and transported is faster and more efficient, especially since the grain elevator has a newly constructed railroad spur that surrounds the facility. To make use of the land on Gavilon’s property, the previous land owner is able to still work the ground that is not being used at this time.

Following through on his commitment to meet with Montanans in each of the state’s 56 counties, Gov. Gianforte will kick off this second annual tour visiting all 56 counties in Montana.