In the coming decade there is much that is going to change about travel through the Billings I-90 corridor.  Interchanges will change, highways broadened and bridges reconstructed – all are projects in the planning stages, with some already underway.

The Johnson Lane Interchange, pictured here in Lockwood, along Interstate 90 will look completely different once the new diamond Interchange is constructed to accommodate the new traffic from the Billings Bypass. This exit in Lockwood is considered the busiest Interstate exit in the state with all the truck stops and truck traffic that uses that exit. This image of the Lockwood interchange is looking North towards the Yellowstone River. The Diamond Interchange and layout will be the first in Montana. From this Lockwood Interchange on Interstate 90, another project has been approved to expand the interstate from Johnson Lane to 27th street exit to 3 lanes each way on the Interstate. (Jonathan McNiven Photo)

While much has been heard about the improvements planned to the I-90/ Johnson Lane Interchange as part of the Billings Bypass project, there’s not as much awareness about the other improvements in the Lockwood area and along I-90 through Billings.

The projects emerged from a 2012 study about future needs for Billings’ traffic as it impacts I-90. The projects will accommodate increases in traffic and improve overall operation and safety.

The Montana Department of Transportation (MDT) plans to widen from two lanes to three lanes a stretch of I-90 from the Johnson Lane Interchange to the South 27th Street Interchange. 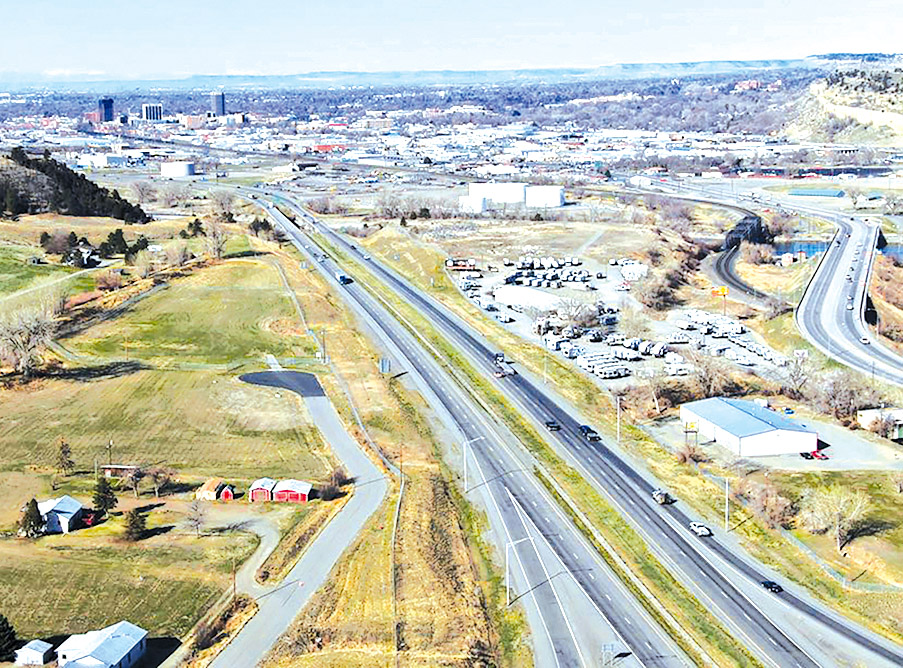 Part of the Interstate 90 expansion from two lanes to three lanes will include expansion of the Yellowstone River bridge into Billings where recently a historic pileup occurred involving 30+ vehicles. The increased traffic from the Billings Bypass and 3 lanes on the interstate will alleviate congested traffic along Dick Johnson Bridge (road on the right side of picture crossing the Yellowstone River) that connects Lockwood to the MetraPark and downtown Billings. (Jonathan McNiven Photo)

The first phase of widening the Interstate will be on the west end from the Lockwood Interchange to the 27th Street Interchange, which includes the reconstruction of the bridges across the Yellowstone River and the Talen Railroad Spur. Final plans for widening the interstate and building the bridges are to be completed by the end of March, and bids may be let sometime this summer. HDR is the engineering firm designing the project.

The plan to add additional two lanes to I-90 avoids having to gain more rights-of-way by expanding into space that is currently the median.

Following a recent public hearing the Lockwood Steering Committee began a petition to MDT objecting to the fact that the plans for the bridges are without accommodation for pedestrians or bicycles. They are asking MDT and HDR engineers to address the common vision of the community for the future of Billings and Lockwood by including pedestrian/bike access. 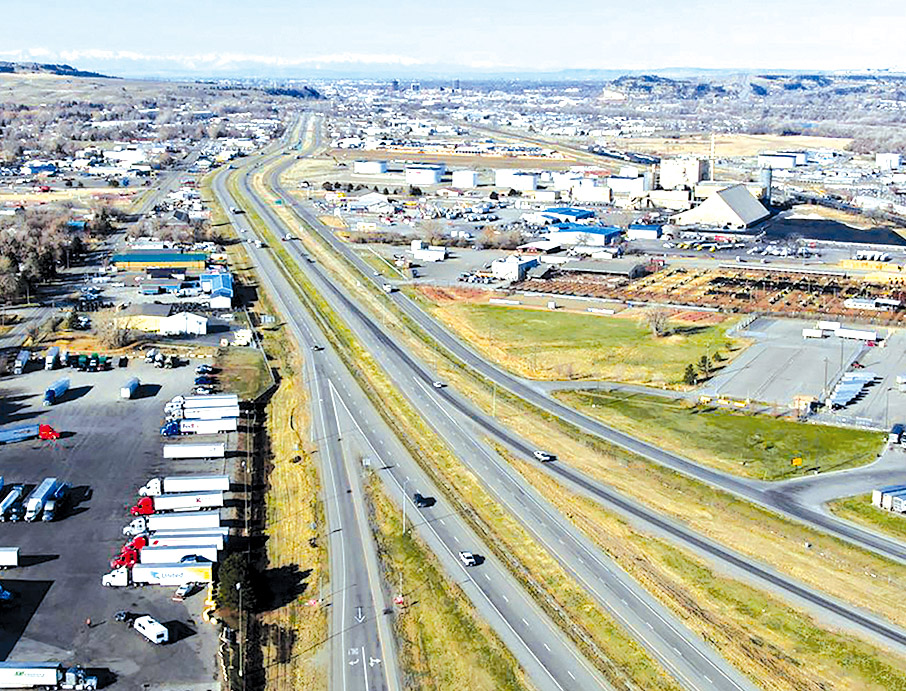 The Montana Department of Transportation will be expanding Interstate 90 from two lanes to three lanes going both ways from the Lockwood Johnson Lane Exit, bottom right, and extend all the way through the Metra Exit. (top middle) and then on to 27th Street exit in Billings. (Drone Image by Jonathan McNiven)

Public comment during the hearing also brought up the multi-modal issue, and MDT officials and engineers said that the issue had not been overlooked, but they had determined not to include the multi-modal access because of increases to the cost and the fact that it would require gaining additional rights-of-way extending the time frame, as well as the cost, and it could have possible flood plain impacts in providing trails to get to the crossings. A special public meeting may be held to further explore this public concern.

During construction, two-lane, two-way traffic will be maintained, except during the winter shut down period when the interstate will reopen to four lanes for safety reasons.

It’s been widely heralded that the reconstruction of the Johnson Lane Interchange is to be the first Diverging Diamond Interchange in Montana, but it was announced at a recent public hearing that the preferred alternative being considered for the Lockwood Interchange — where Highway 87 crosses over I-90 – will also be that of a Diverging Diamond. HDR is also the engineering firm designing this project.

A Diverging Diamond Interchange is one in which the two directions of traffic cross over to briefly drive on the opposite side of the road from what is customary, offering many safety benefits. (See video of a diverging diamond interchange here: tinyurl.com/JohnsonLaneDDI)

The Lockwood Interchange project also includes the widening of I-90 to three lanes to the Johnson Lane Interchange.

Also, plans for the Lockwood Interchange include improving safer access at the intersection of Hwy. 87 and Coburn Road, just south of the Interchange. Because of its proximity to the interchange safety features are needed, said engineers. While other options are being explored, the preferred alternative that is emerging would be to convert the Coburn intersection into a three-quarter access. This would allow right turn and left turn lanes from Hwy. 87, onto Coburn Road, but a left turn from Coburn Road onto Hwy. 87 would not be allowed. Left turning traffic onto Hwy. 87 would be required to take a right onto Rosebud and then take a left onto Lockview Lane to its intersection with Hwy. 87, where it would be safer to make a left turn onto Hwy. 87.

Public comment regarding all plans for all projects is encouraged by MDT. This is especially true for the Lockwood Interchange for which plans are in the earliest stages – about 30 percent complete. To see an interactive map for the project areas go to https:// experience.arcgis.com/ experience/ ffc303851f784e23ab 411f6dab6e70ca

(Another project – First Avenue and Exposition Drive — currently in the design stage will reconfigure and rebuild Highway 87 as it rounds the perimeter of Metra Park to Exposition Drive which leads to the Heights’ Main Street.)

Work was completed last year on the first phase of the Bypass, which involved the widening and reconstruction of Five Mile Road in the Heights. Work continues on the new bridge and the Johnson Lane Interchange.

Granite Construction/LHC will be the construction manager/general contractor to build the interchange with construction anticipated to begin in 2022. Currently MDT is meeting with property owners and stakeholders as permits and right-of-way are acquired.

Another phase of the Billings Bypass project is well underway – the construction of a new bridge across the Yellowstone River which will ultimately provide motorists, bicyclists, and pedestrians a connection between Lockwood and the Billings Heights.

As construction of the Billings Bypass Yellowstone River bridge moves forward MDT is providing a live webcam for the public to view real-time construction progress (the webcam is available at https:// www. mdt.mt.gov/ pubinvolve/ billingsbypass/). Construction of bridge piers from the temporary work bridge is continuing in anticipation of beam placement.

Construction is being completed by Wadsworth Brothers Construction and is planned to be predominantly complete by the end of 2021. 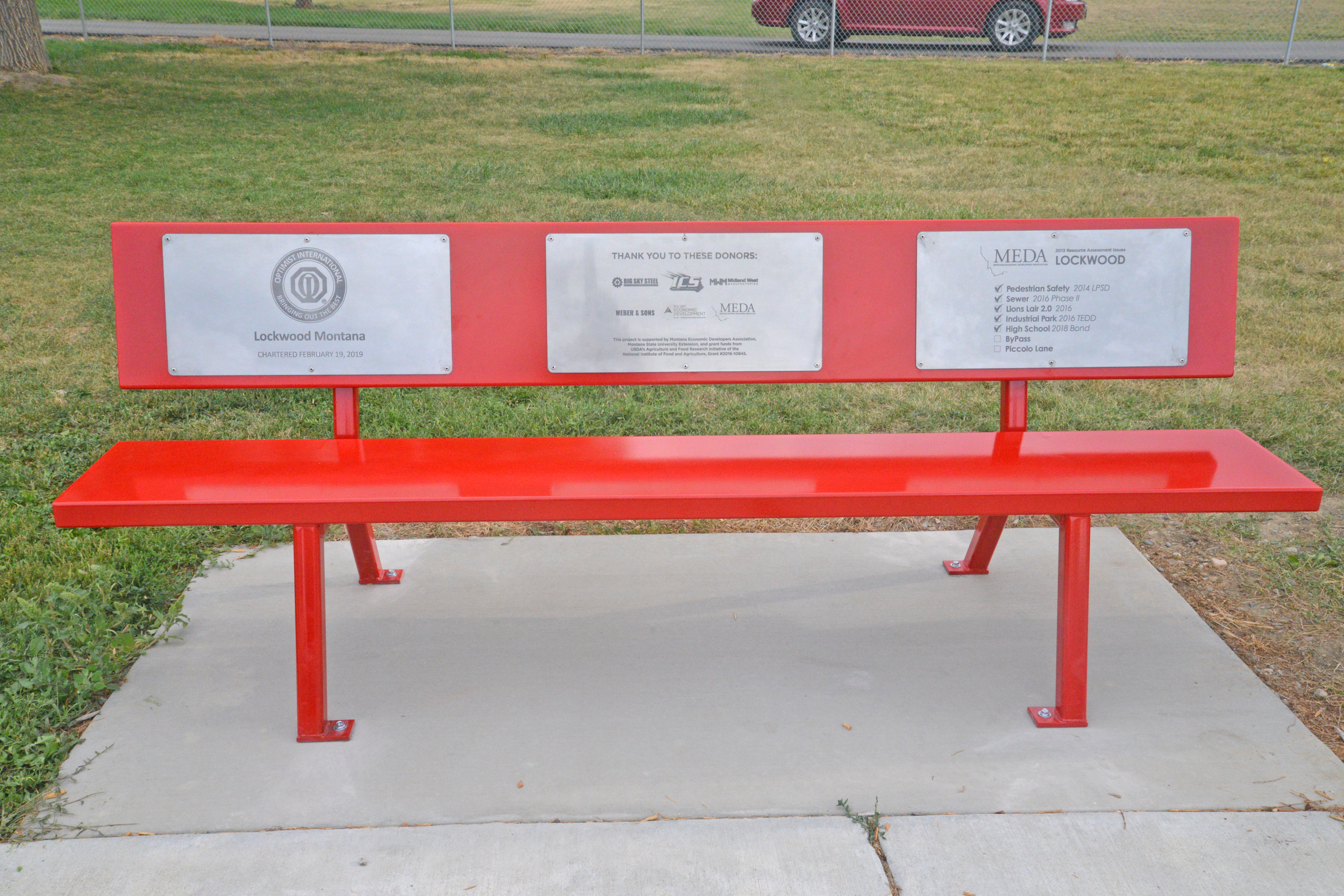