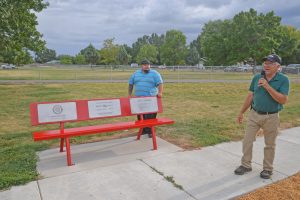 Despite a threatening storm, Lockwood residents and fans of the community turned out on Thursday evening for a celebration of Lockwood’s achievements over the past five years. The event focused on the dedication of a bench at Lion’s Lair 2.0 , a gift to the community by the Lockwood Optimists Club and other community benefactors.

The Lockwood Planning Steering Committee also helped organize the event that featured speakers and a barbecue.

Bob Riehl, chairman of the Steering Committee, who was dubbed “Mr. Lockwood”, introduced five speakers who related the top five accomplishments of the past five years, since 2013. October 2013 was when the Montana Economic Development Association (MEDA), came to Lockwood to conduct an assessment of the community and identify its needs and a strategy to achieving its goals. 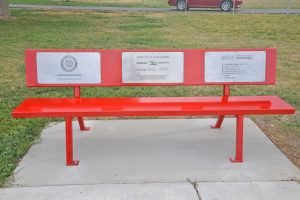 New Celebrate Lockwood bench reveals a couple events to be completed still in the Lockwood area from the 2013 MEDA event. namely the Billings Bypass and (Jonathan McNiven Photo)

Many of those goals – and a few unanticipated ones — have been achieved. The five which were highlighted included the creation of the Pedestrian Safety District and its work; the success of the Lockwood Water and Sewer District in building the second phase of the sewer system; the establishment of the Targeted Economic Development District (TEDD); the building of Lion’s Lair; and the creation of k-12 school district which includes a high school.

Talmark announced that the construction of a sidewalk along Becraft Street will begin on September 7, following the successful projects on Highway 87 from Peter Street to the Old Hardin Road intersection, and another segment from that intersection to the IGA Grocery Store. 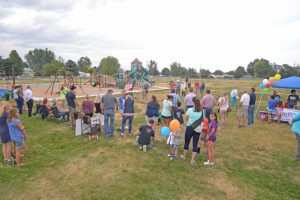 Speaking about the TEDD, Woody Woods reported on the development of the TEDD and that it has met a snag in the demand by the City Manager of Billings that the property owners forego their future right to protest annexation in order to expand the Lockwood water/sewer boundaries. A successful TEDD will mean economic growth for Lockwood and the county, he said. The new bypass will bisect the TEDD and that construction will begin this fall on the first phase of the project. In two years, there will follow construction on the bridge across the Yellowstone River, and after that people in Lockwood, said Woods, will have to be prepared “for a lot of construction” as the Johnson Lane Interchange is rebuilt into a “diverging diamond”, which will connect the bypass to Lockwood from the Heights and will reduce traffic congestion.

Mike Ariztia, Manager of the Lockwood Water and Sewer District, related the success of completing the second phase of the sewer and said that work has begun on the third phase.

Monica Saylor related the story of rebuilding Lion’s Lair and how pleased the committee is that the bench is being located at the playground.

Superintendent Tobin Novasio thanked the many people who played a role in making the new Lockwood high school a reality. He said that he believes a schools reflect the community they serve and Lockwood School District does that. “We have the best school in the state because we have the best community in the state,” he said. He invited the community to do a walk-through of the completed CTE Building which will serve as the school for this year’s inaugural freshman class, at a ribbon cutting ceremony at 8 am on September 3, opening day of classes.

Riehl told the audience, “I you think there are things that need to be changed in Lockwood, look around and say to yourself, I’m part of Lockwood and then make it happen.”

Placement of the bench was made possible by grant funds from USDA’s Agriculture and Food Research Initiative of the National Institute of Food and Agriculture helped in financing the project, as well as donations from Big Sky Steel, Industrial Coating Solutions, Inc., Midland West Manufacturing, Weber & Sons, EDA and MEDA.