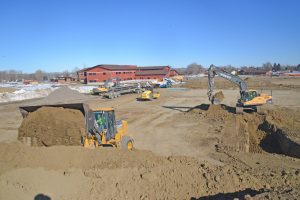 Dirt work, excavation and trenches are being completed to prepare for footing for the new CTE building for Lockwood’s first High School Building. (Jonathan McNiven Photo)

Driving onto the Lockwood School campus anymore leaves little doubt that construction of their new high school has begun. During the meeting of the school board, details about that process was front and center as builders and contractors reported on the progress, the board approved the first phase of bid letting, and next year’s roster of teachers was reviewed. In fact, the board acted on Tuesday evening to hire the very first teacher for Lockwood High School.

Rich Malia, a retired SD2 teacher, was hired as the Traffic Education teacher. He will be on a .33 FTE teaching contract for two class periods which will be offered during the regular school day next year.  Lockwood will pay him $32/hour for the summer program. Malia has had 36 years experience teaching driver’s education and 35 years as wrestling coach.

Superintendent Tobin Novasio reviewed his recommendation for assigning principals in the future, explaining that they will hire one new principal for next year. He said they will hire

The board agreed to add five days to the contracts for Klasna and Activities Director Marc Dearing because of the need for them to begin dealing with administrative needs and early sport activities ahead of the beginning of the new school year. Also, the certified staff hired full-time, at the high school, will be allowed five additional days at a stipend of $125 / day, in August, to work on developing their curriculum. Teachers teaching part time at the high school will be allotted two such days at the same amount. 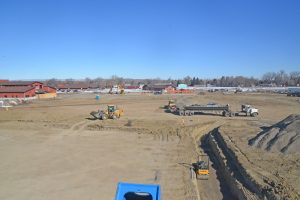 An overview of the Lockwood High School Construction site as of 3/20/19. (Jonathan McNiven photo)

Langlas Construction presented the list of sub-contractors selected from the first round of bid packages let, and the board approved the expenditure of $38.9 million to pay for the work they will be doing, which will include excavation and site work and concrete work. Almost all of the contractors are local. Langlas Construction has prepared 150 bid packages, and since the first round involved 90 packages, 40 more are yet to be let.

Working on what was called “an extremely accelerated schedule,” contractors were given the leeway to work a six –day week.

Novasio asked the board for direction on how to handle change orders. Up to what amount, he asked, did the board want to authorize the oversight team to give approvals for change orders without consulting the board? After considerable discussion the board decided that they would follow the state’s limit for expenditures of $80,000, but they said they wanted to be kept in the loop on, a weekly basis, as to what is happening. Novasio added that even with that limit, if an issue arose that was likely to be controversial or problematic in some way, he would still consult with the board.

Bids were received from roofing contractors to re-roof the second grade hallway area of the primary school building. They accepted the $133,571 bid from Kirkness Roofing. The bids ranged up to $200,000, said Novasio. The bid from Kirkness was 25 percent below what was expected that they decided to move forward with the project, he said.

The board also approved a resolution to accept the estimated permissive funds levies which is required to be published in advance of setting the actual levies. District Clerk Laurie Noonkester explained that they are required to make the estimates and publish them by state law, but it troubles her having to do so because it tends to confuse taxpayers, since some of the levies will not be as high as they are indicated in the published notice,  but to be prudent they must keep options open to the board.

“This is a worst case scenario,” said Novasio.

The levies which include programs like adult education or district transportation costs, also includes the permissive building levy for which they have no plans to levy at all – except in the “remote” possibility that the state legislature appropriates funds to match expenditures by school districts. If that were to happen, Lockwood could qualify for as much as a $55,000 state grant, but to be able to take advantage of that windfall the levy estimate must be set now.

At the recommendation of Novasio the Board approved the decision to not require students and/or teachers from having to make up their one “snow day” this year. He explained that much of the decision not to hold school on Feb. 27 was made the night before during a heavy snow storm and with the forecast for very cold temperatures, but tipping the decision was learning that School District 2 was going to cancel classes. He said holding classes in Lockwood would have created confusion.