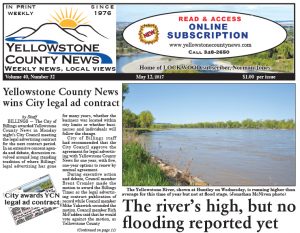 Originally published in the print edition 5/12/17 of Yellowstone County news.

Billings- The City of Billings awarded Yellowstone County News in Monday night’s City Council meeting the legal advertising contract for the next contract period. In an extensive consent agenda and debate, discussion revolved around long standing tradition of where Billings’ legal advertising has gone for many years, whether the business was located within city limits or whether businesses and individuals will follow the change.

City of Billings staff had recommended that the City Council approve the agreement for legal advertising with Yellowstone County News for one year, with five, one-year options to renew by mutual agreement.

During executive action and debate, Council member Brent Cromley made the motion to award the Billings Times as the legal advertising contract publication of record while Council member Mike Yakawich seconded the motion. Council member Rich McFadden said that he would vote against the motion, as Yellowstone County News actually “had won the bid and came in lower.”

Councilman Rich Friedel said that he would speak against the motion as he said this motion “seems more as a protectionism more than anything else and not letting the free market dictate how these things are done.”

Councilman Ryan Sullivan said that he would speak in favor of the motion to award the Billings Times as “all of the county’s legal notices are in the Billings Times, so are we going to be the only one governmental organization that is going to jump over to the Yellowstone County News… and essentially force people to buy two sets of newspapers just to look between multiple government entities?” He continued, “They are cheaper, but for us to go and jump out there, they have to be substantially cheaper, and they are not. If we got a good deal, then I would expect the county to do likewise.”

Council member Richard Clark said the staff did a good job and basically checked off the requirements and that he would support the staff recommendation.

Councilman Shaun Brown said the formal protest by the other entity was not completed “even after they were notified of the process and that did not take place.” He continued “that there was nothing in the RFP that said that you have to be within the city.”

Larry Brewster stated that it “raises Cain with the whole bidding process. If we are going to just ignore what we got and go with who our old friends are, we are not going to get people to bid in the future.”

The City spends on average about $21,000 per year for legal advertising and has been using the Billings Times for the last 27 years.