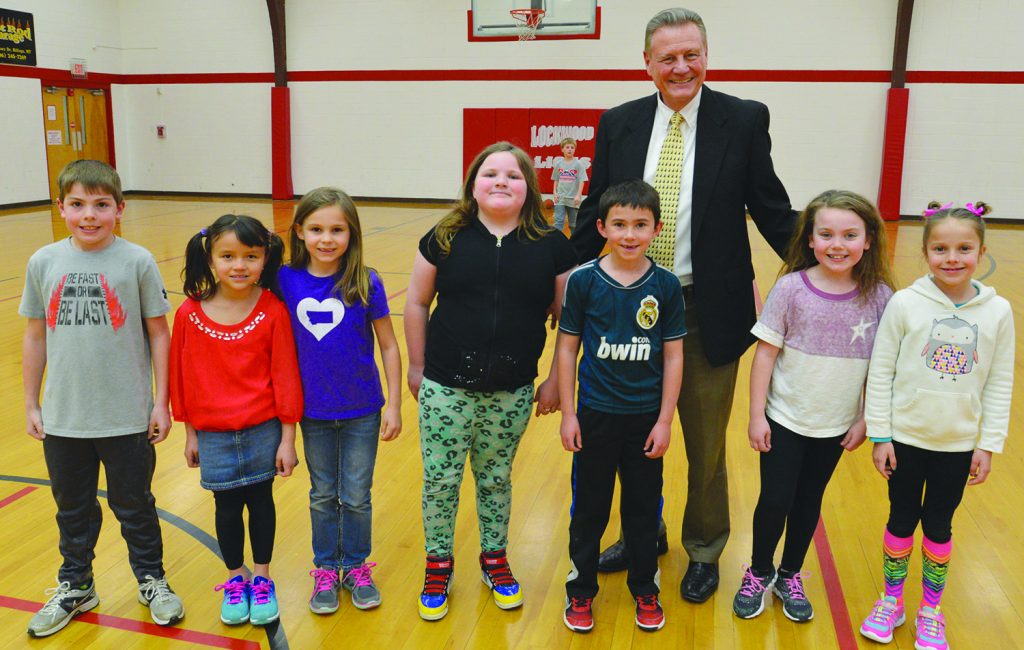 Originally published in the print edition of Yellowstone County News on March 31, 2017.

And the longtime Lockwood elementary principal has had the opportunity to choose fine teachers often during his career at the school, which he announced this week will come to a close with his retirement at the end of the school year.

Bowman came to Lockwood in 1985, leaving a post as superintendent in the Missoula County school district. He said he wanted to be less political, less administrative and spend more time with students.

“I wanted to spend my career working with young people,” he said.

His teacher selection philosophy meant that at times during his 32 years in Lockwood he chose an inexperienced teacher over a more seasoned candidate.

“I’d rather have a teacher who loves kids, who needs a little help coming up to speed,” than a “highly professional one who doesn’t love kids,” Bowman said. “That relationship piece is so very important.”

It might sound elementary, no pun intended, but don’t laugh: Bowman has seen his share of teachers who don’t love students, who are just there to work. The district also attracts a lot of student teachers, and some of them complete their coursework for a teaching degree only to arrive on campus and find that teaching students day after day is not for them.

“You can’t teach teachers to love children,” Bowman said. “You won’t be happy here if you don’t.”

Bowman said he and Superintendent Tobin Novasio share the belief that “a school is a place where students come to learn, not where adults come to work,” Bowman said. “They’re the reason we’re here. We have to keep our perspective.” 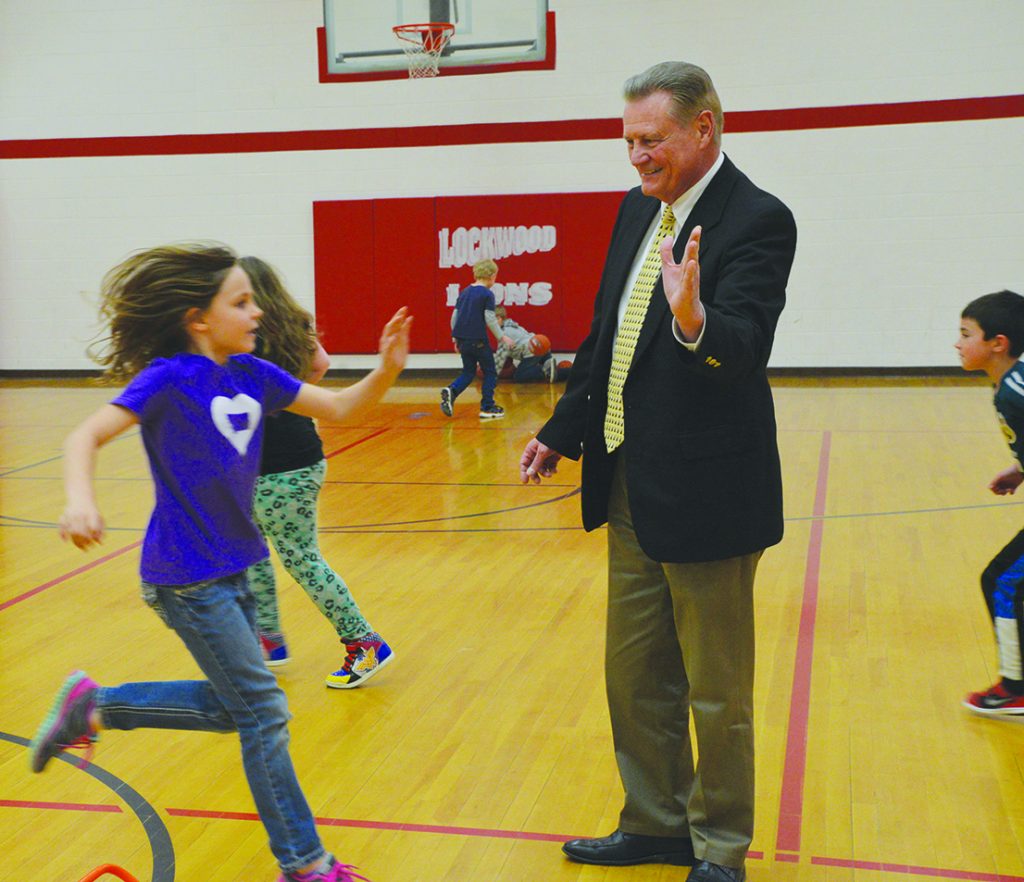 Principal Mike Bowman high-fives Reese Griesmer as she runs and jumps over a series of small obstacles in PE class on Tuesday. (Judy Killen photo)

A native of Whitehall, Bowman forged an early career, of sorts, working for the railroad, beginning when he was an 18-year-old high school senior on the night shift after school. The railroad job helped pay his way through a bachelor’s degree from Western Montana College, now University of Montana-Western, and two master’s degrees at UM in Missoula. He began his 45-year career in education in Ronan, then spent seven years in Missoula, where he was superintendent from 1979 through 1985. At that time, he considered an offer in Bozeman but chose Lockwood and never left.

He likes the community and how people support the school by attending school events and hosting outside meetings there, which keeps the building busy day and night.

“The community loves their school,” Bowman said. “They support it, they stand behind it. We have standing room only at a lot of our activities.”

An elementary school is ideal for Bowman, who spoke enthusiastically about nurturing and caring for students and finding ways for them to succeed no matter what their needs are, from gifted students to special needs students and everyone in between.

He’s built a team of enthusiastic teachers who believe, as he does, that their students don’t have to be molded to the expectations of federal standards spelled out in catchy names like “No Child Left Behind” and “Every Student Succeeds Act,” known as ESSA.

In Lockwood, it’s more like “every kid, every day.”

Bowman said Lockwood has been lucky over time to attract bright teachers who bring out the best in their students. Those teachers also build their own curriculum rather than buying it.

“We’re able to recruit the best teachers,” he said. “They’re good for kids. We’ve always been known to be innovative and they want to try it.”

“We look at the standards but we think we know what’s best for kids,” Bowman said. “We like to flourish with our own materials. We try to walk our own line.”

At Lockwood, with all students on one campus from kindergarten through eighth grade, Bowman said, “We can start a new program easier. We can get after it” rather than waiting for all the schools in a district to get on the same page.

“We don’t put barriers in front of our kids,” Bowman said. “Our kids are able to progress ere at least as rapidly or more as in a lot of other places.” That means students get the help they need to boost their progress, and gifted kids get chances to see what they can do.

“We put a lot of effort into struggling kids,” Bowman said. “Our extremely capable kids, we just let them run.”

The school does administer federally required tests, he noted, but he believes that “you can do your best for kids, you don’t have to feel shackled by a system that doesn’t want to change.”

No Child Left Behind, particularly, required “too much testing and not enough teaching,” Bowman said. “You don’t teach them to think on their own, to develop new concepts.”

“They’re still trying to sort out the ESSA,” Bowman said. “If we sat around and waited for the federal government to tell us, our kids would suffer. We don’t want to get robotic.”

All that attention to student needs translates into lots of small groups — Bowman said small groups often create greater comprehension than one-on-one tutoring because the group dynamic generates more ideas. He compared the school to a beehive of activity most days.

“When you see how it all fits together,” he said, “you see how marvelous the whole thing is.”

“They keep you young,” Bowman said of elementary students. “They’re happy about life. You can’t help but be buoyed up by them. It’s an incredible work to be around children.”

He likes to watch the youngest ones, the ones he sometimes does magic for, “start to have confidence in themselves when they start to comprehend reading. The sense of accomplishment, the whole new world that it opens up to them,” he said. “They’re so proud of themselves.

He likes to watch the older kids, the ones who use journaling and other writing to begin self-discovery.

“Everyone’s got a story to tell,” he said. “I encourage them to tell their own story.”

And he tells stories, too, including a children’s Christmas book he wrote in 2011, “Santa Came a Day Late,” which was illustrated by his daughter.

He reads to students, eats lunch in the cafeteria with them every day and tries to make school a safe, happy and positive place for children, some of whom find school a haven from their struggles with problems outside school. Even children enjoying a happy childhood deserve a school that values them and lets them grow, he said.

Of course, times have changed since he came to Lockwood and teachers have more to deal with, like Internet safety and suicide awareness.

“There’s a whole world of information out there,” at students’ fingertips and instantly available, Bowman said. “We don’t want our kids preyed upon.”

He believes that schools mirror society, and “when there’s a problem in society, society says, ‘Let the schools take care of it.'”

Bowman hasn’t planned his retirement yet, preferring to savor the remaining weeks at school with the children he loves.

“I don’t know what the future will hold,” he said. “I jokingly tell people that I’d like to be a Navy pilot,” but what he actually does will “probably be something less adventurous.”

He and his wife plan to spend family time with their children who live out of state, he said, along with some community and church volunteer work.

“My hobbies are fishing and family history,” he said.

Over the years, he watched students grow up and bring their families back to Lockwood and send their children to “their” school.

They come back and tell Bowman, “You taught my dad, you were my mom’s principal,” he said. “I’m probably to the point where, I don’t want to know about it, but I may have grandchildren (of former students) here too. I’m thinking I’ve been here long enough.”

← SB 139 passes House on second reading, back in committee
Board Member Guenther resigns, Fire Board vacancy opens up →