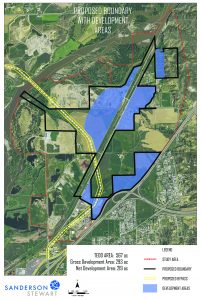 This image shows the boundaries of the Lockwood Targeted Economic Development District, or TEDD, approved by the Yellowstone County Commission. Click on image to enlarge. (Image courtesy of Sanderson Stuart)

Published originally in the print edition of the Yellowstone County News.(Click to view full story)

“I think the commissioners made a decision that is a big step in the right direction,” said Steve Arveschoug, BSED executive director. The whole goal is to help the community and land developers ready an industrial space that will advance economic development, he said.

The TEDD, however, is just one tool.

“We will look at other grants and tools to capitalize on the development of that area, consistent with the comprehensive development plan,” Arveschoug said.

The TEDD steering committee that has helped direct the process, so far, will be meeting this month with Deputy County Attorney Dan Schwarz, who will answer any legal questions the group may have.

The next step in the process, said Arveschoug, will be to ask the County Commissioners to appoint the advisory board provided for in the TEDD, which will help plan and direct “the process moving forward.” The final step in the process is to send the documentation to the Department of Revenue, which will set the tax base year as 2016 and start calculating the increment.

“We have to assume there will not be a lot of increment” for a few years to start any project, but they will be looking at other potential revenues and grants to serve as a catalyst, said Arveschoug.

While the TEDD is aimed at providing some of the financing that will be needed to develop an industrial park, for many of those from Lockwood who testified in support of the TEDD, the benefits they see are for planned growth, as well as an opportunity for Lockwood to retain and direct how tax revenues will be used in their community.

Among property owners and business owners who stand to eventually benefit, the TEDD promises to build infrastructure which no single business by itself is likely to be able to afford.

BSED initiated the TEDD, two years ago, in its quest to establish an industrial park, which a study determined is needed in Yellowstone County. The study identified that the best location of three possible sites is in a Lockwood area at the intersection of Johnson Lane and the Interstate, north of Interstates 90 and 94 and south of Yellowstone River. The 570-acre industrial park is wholly incorporated in the TEDD. The properties are currently used primarily as agricultural land, with a few industrial businesses. There are 11 property owners within the TEDD, including the Trailhead Commerce Park, a project that was earlier launched by Weave Management Group.

A TEDD is a tax increment finance district specifically dedicated to support manufacturing and other “value-added” kinds of businesses. Any increase in tax revenues generated beyond the base are directed to funding improvements within the boundary of the TEDD. The funds can be used to bond or to match grants or private sector investments.

The Lockwood site is next to what is expected to be the intersection of the proposed Billings Bypass, which will provide a route between Lockwood and the Heights with a bridge across the Yellowstone River, adding significantly to what is already a key transportation corridor in Lockwood, with the convergence of interstate highways and two railroads.

“There is going to be massive growth out there,” said Commissioner Jim Reno, who wanted to reduce the amount of time that jurisdictions, such as the school district, would have to wait to benefit from growth. He made a motion to approve the TEDD.

Reno said that he agreed that “you can use or abuse TEDDs.”

“The downtown one was necessary” he said. “The South Billings Boulevard was unnecessary.” Reno said he understood how they could “jump start” economic growth, but was concerned that taxing jurisdictions could not benefit from new growth for such long periods of time.

Commissioner Robyn Driscoll asked, “Could we redirect a portion of the tax back to the taxing jurisdictions?” She said she thought Lockwood would be going to the state Legislature every two years until they got the right to consider a high school for themselves. When the time comes that they are building a new school, they will want the revenue that is going into the TEDD, she said.

Schwarz said that is provided for in the state law. Upon agreement of the county commissioners, any or all of the increment could be rescinded back to the taxing jurisdictions. The only restrictions are that enough tax must remain within the district to cover any indebtedness the district might have. Any payback of taxes must also be done proportionately in keeping with what each taxing jurisdiction would have received without the district, which means, for example, they couldn’t allow a payback to just the school district; it must be made to all taxing jurisdictions.

Driscoll offered an amendment to the motion to require that the increment be split 50-50 with the taxing jurisdictions.

Reno offered an addition to Driscoll’s amendment that would provide a sunset date, which she rejected.

In responding to some of Reno’s questions about imposing a sunset provision, Schwarz said, “Remember the Board of County Commissioners retains ultimate authority.”

All three county commissioners voted to approve the TEDD, with the amendment, “Pursuant to MCA § 7-15-4291, the Board of County Commissioners agrees that it may distribute up to 50 percent of the increment in any year to the affected taxing bodies, subject to retaining amounts necessary to service any boding requirements of the district.”