by Evelyn Pyburn-Originally published in the print edition of the Yellowstone County News. 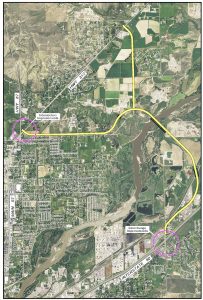 The yellow line in the illustration shows the intended route of the Billings Bypass, which could begin construction in 2019. (Courtesy image)

BILLINGS — It is really going to happen.

Longtime residents of the Billings area have heard about the Billings Bypass for so many years that many no longer believe reports that it is finally going to be built — but they will soon be surprised. The first dirt moved for the project is most likely to happen in 2019.

The Billings Bypass is a proposed new route that will connect the north end of Main in the Heights and Johnson Lane Intersection in Lockwood, including a new bridge across the Yellowstone River.

Although it’s not very visible, a lot of work has been done on the Billings Bypass since the Montana Department of Transportation (MDT) contracted with DOWL to develop the design, about a year ago. Designs for the first phase of the project are expected to be completed in time to have it to contract in 2018. A lot of data gathering has been going on, reports project leader for DOWL, Todd Cormier, P.E., PTOE. The data is essential in developing a design and planning construction.

Cormier, MDT District Administrator Stefan Streeter and Gary Neville, MDT engineer, met this past week for an update with Yellowstone County News. MDT Engineer Consultant and project manager for the Billings Bypass, Fred Bente, was on conference call for the meeting.

Teams have been gathering detailed information regarding soils, flood plain, traffic patterns and types, and surveying, since the Record of Decision (ROD) was issued in July 2014. Acceptance of the ROD gave the project a green light, following 10 years of research and public comment for the Environmental Impact Statement (EIS), which identified a prospective corridor for the new route.

“We will design the bypass within that corridor,” said Streeter, who believes the Billings Bypass is “an incredibly important project for Lockwood and the Heights.”

It will reduce traffic volumes on Main Street, Airport Road and Bench Boulevard. “If it isn’t done, the majority of intersections will go to levels D and E,” said Streeter. The letter grades pertain to an intersection’s functionality.

The Billings Bypass project is a very complicated and complex one that has a lot of moving parts — a lot of details, and a lot of things that must be done before other things can be done. A print out of the timetable would wrap several times around the room, said Streeter.

The project will be done in phases – probably six phases. A priority for the phases and timetable have yet to be determined and will depend on funding availability and transportation needs. The Federal Highway Department, from which the funding is coming, requires that each phase, when completed, be functional in serving immediate transportation needs, without the other phases necessarily having to be completed.

The first phase will most likely be the re-building of Five Mile Road, “for a lot of reasons,” including that it is one of the easiest and least expensive phases. Improvements to Five-Mile Road as a secondary access is important for early completion because the road will help alleviate traffic pressure on other streets, which will occur as a result of the project. More details on the Five Mile Road project will be the focus of discussion in a public informational meeting that will be held in November.

More than one phase might be built in a year, and maybe a phase will take more than a year to build. The bridge across the Yellowstone River is expected to take two construction seasons to build.

The priority of the bridge will depend on how rapidly Lockwood experiences growth. Maybe the proposed TIF (tax increment finance district), if it is approved, will result in an increase in truck traffic, which will make re-building the Johnson Lane Intersection more critical, said Streeter. The TIF, a special tax district that focuses property tax revenues to a specific area, is being proposed to help finance an industrial park near the Johnson Lane intersection. But throughout the project area, MDT will be monitoring traffic flows closely to determine priorities.

There are enough remaining earmarked funds, which were granted by the federal government to do the EIS, to fund the Bypass design, and there will probably be enough to help acquire some of the right-of-ways, said Streeter. Right-of-way acquisition does not begin until they have “a good set of plans.” It will probably begin this coming spring for the Five Mile Road phase.

Funding for the Bypass flows to the state from the federal government. The funds go into a number of different pots – urban funds, bridge funds, safety funds, etc. The Billings Bypass will draw from several of those funds for its construction. In identifying the Billings Bypass as a priority project, the Billings and Yellowstone County Metropolitan Planning Organization (better known as the Policy Coordinating Committee) approved directing some of their annual allotment of urban funds to the project until it is completed.

While the project is “fiscally constrained,” which means MDT has identified how it will be funded, there is the possibility that unexpected funding may materialize, which could advance the project even faster. It’s happened before, said Streeter, pointing to the unexpected funding that came to the state under the American Recovery and Reinvestment Act of 2009 or projects that were moved ahead of schedule because of cost savings that came from an economic downtown that lowered construction bids.

Most of the project is being planned and built to meet the community’s projected needs for the next 20 years, however, aspects of it are planned with an eye to the future when more lanes will have to be added. For example the bridge will be built to accommodate four lanes of traffic. Bridges are built to a longer expectation of serviceability, 75 years rather than 20, said Streeter. And, as much as funding will allow, they will preserve as much as possible of the corridor for future expansion.

Given that there is much public interest in what the Lockwood interchange will look like —whether it will be a roundabout or a “diverging diamond” or a more standard signal-controlled interchange, will largely depend on the kind and amount of traffic their traffic studies predict, explained Neville.

Streeter emphasized that at all times, their top priority is safety.

“We have to do what is right for all users and make sure that it is safe,” he said.

Intersection designs will be done by Kittelson & Associates, Inc. (KAI), who were credited by Cormier as being one of the best firms in the nation to design intersections.

One area of great concern to some people is the impact that the Bypass will have on Dover Park, on the north side of the Yellowstone River, below and above the rims. The proposed bypass will cut right through the park, which was dedicated by the Sindelar family to be a natural area. Streeter said that they have had conversations with the Yellowstone River Parks Association, the non-profit group that is developing the park, and they will have more discussions with them as plans advance. He said that they want to try to accommodate the park as much as possible. Plans are to include pedestrian facilities and an underpass.

While the Bypass is a high profile project for the community, there are other projects in the works that will also have significant impact for both the Heights and Lockwood. A big change for the Heights will be the completion of Bench Boulevard, which has been redesigned, widened and repaved to increase its capacity. It is expected to be fully completed next spring.

Two other projects will probably be considered in the setting of priorities for MDT’s next five-year plan, at a state meeting to be held near the end of October. They include improvements and re-pavement of Main Street and the widening of Interstate 90 between South 27th Street and the Lockwood Interchange, from a two-lane to a three-lane