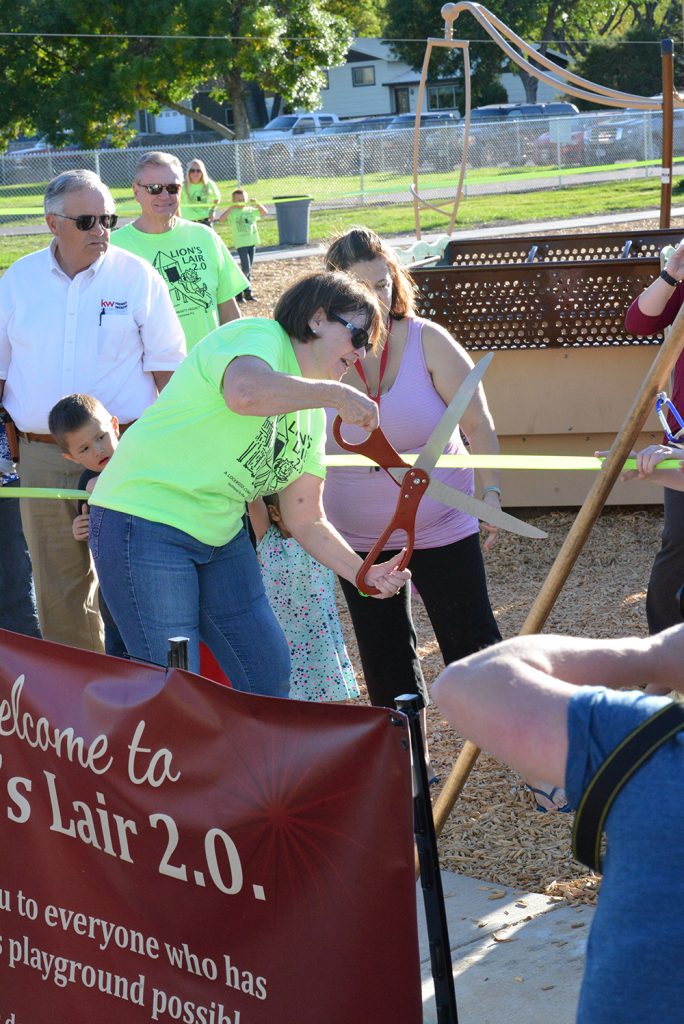 The Lockwood Lions Lair 2.0 grand opening opened the new playground to the public with a night of celebration from the big fundraising efforts that took place over the last two years.  Next to the Lockwood School Elementary, some 150-200 locals and visitors participated in the big day that the kids could officially play on the play ground due to the previous playground being shutdown due to safety reasons and issues about 2 years ago.  The Lockwood Lion’s Lair fundraising efforts were backed by the Lockwood PTA and area businesses due to fundraisers, activities, and donations that went towards the new lion’s lair construction.

In naming the Lockwood Lion’s Lair 2.0, it was to show the upgraded playground and efforts from the original playground that was completed a couple decades ago for the community to enjoy. Local businesses, individuals, groups and other donations answered the call to help support the school children and allow the community to have a place for families and children to have fun in the community whether during or after school. 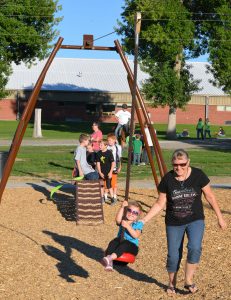 3 year old Lockwood resident Zoe Sherman rides on the new zip line while Grandma Bonnie Huck helps her along during the grand opening celebration of the new Lockwood Lion’s Lair 2.0 on Friday September 16. (Photo Jonathan McNiven-Yellowstone County News) Editor’s Note: You’ve got to click to enlarge this picture as Zoe’s smile is worth zooming in on.

From new swings, jungle gym, monkey bars to more slides and a special zip line, kids are sure to enjoy the new playground with parents and school officials assured for the safety of those who enjoy the playground.

The effort to raise more than $230,000 was truly a community-wide cause which some said could never be done. But, with the leadership of the Lockwood PTA, the support of the school, of Lockwood businesses, philanthropic organizations and probably every single Lockwood resident, they did it and Friday’s Celebration was truly the proof with the amount of people that showed up to show their support and excitement for a project that seemed at first an uphill battle.

Especially recognized for her involvement was Sue Robertson, who is retired as a Lockwood teacher of 44 years. Robertson was involved in the building of the first Lion’s Lair. Located near Lockwood School the playground, which brought enjoyment to generations of area families. Loree Baasch, also a member of the PTA and a Lockwood teacher, played a spearheading role in organizing fund raising efforts and planning the playground, over the past several years. The first Lion’s Lair had to be razed when its age made it unsafe. Numerous COP Construction workers were part of the ground breaking ceremony, as they waited to launch into action the construction equipment which was staged around the Lockwood School lot where the state-of-the –art facility will be located. COP Construction volunteered to do the site preparation work which is estimated to be at least a $15,000 contribution to the overall project. Lion’s Lair will be a designated a National Demonstration Site, which can serve persons with and without disabilities, and allow integrated play. It will boast a ramping access system, a “Rock N Raft” which allows for two wheelchairs and six seated children, an expression swing, 75′ zip line and other aspects for exercise and imaginative play.

Domino’s Pizza in Lockwood donated pizza to the first 200 people that attended the grand opening celebration while other businesses like Frosty & Susan Erben, local realtor, contributed money to sponsor the Grand Opening Celebration as well as other businesses and locals who volunteered time, money and services in order to pull off an effort not believed to be achievable at the beginning.  However, from today on, the kids and the community will benefit another hopeful 30 years with the new playground.