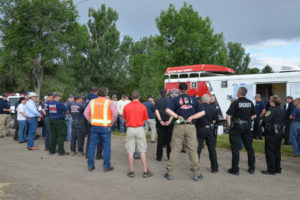 Yellowstone County Sheriff Mike Linder, center, speaks to about 100 people who searched for Taeva Hawkins on Wednesday at a safety meeting at Barkemeyer Park in Huntley. The 12-year-old Lockwood girl was reported missing after swimming with friends near the diversion dam just west of Huntley. (Judy Killen photo)

HUNTLEY — More than 100 trained responders turned out Wednesday in Huntley for an organized search of an 11-mile section of the irrigation canal from Huntley to Ballantine, hoping to find a 12-year-old girl missing since Saturday evening.

Taeva Hawkins of Lockwood was swimming with friends when they swam into the canal operated by the Huntley Project Irrigation District. They entered a tunnel, and when two of the girls emerged at the downstream end, they didn’t see Taeva.

Several boys in a separate group near the tunnel heard the girls’ cries for help and dialed 911, attempting to help them. Emergency crews responded to the area near Tunnel 1 and Tunnel 2 west of the Pryor Creek siphon on Saturday night.

The focus on Wednesday shifted to the area around the siphon, where a search dog indicated places where she may have been trapped by debris.

By mid-afternoon Wednesday, Sheriff Mike Linder said teams were searching on foot and by boat. They are using rakes and poles to prod the bottom of the canal and tunnels, to see if they can feel anything in the water, he said.

“It’s just too murky to see anything,” Linder said. Crews reported feeling a few potential objects, but needed more time to determine what may be in the water.

The Huntley Project Irrigation District lowered the water level in the canal, which allowed searchers to see the banks below the vegetation.

“They’re working it pretty heavy,” Linder said of the search crews, adding that no time limit has been placed on the search. “We’ll give them as long as they want and need.”

In a multi-agency search, more than 100 responders from the county’s rural fire departments, the Department of Natural Resources and Conservation, Laurel Fire Department, K-9 Teams, U.S. Water Rescue, Billings Police Department, the Yellowstone County Sheriff’s Office and AMR gathered at Barkemeyer Park Wednesday morning, split into teams and were assigned to 10 specific areas along an 11-mile stretch of the canal from west of Huntley to Ballantine.

Linder urged searchers to be diligent, even if what they find seems insignificant. Any evidence could help find her, even if it’s outside the canal.

“We don’t know that she couldn’t have possibly gotten out,” Linder said.

Chief Brent Peters of the Laurel Fire Department, reviewing safety procedures for the group, advised them to watch for snakes, animals such as raccoons and even livestock on private ground, wear life jackets and take every precaution.

In case they have to recover the girl’s body, Peters said, “Prepare for what you might see. I cannot stress this enough.”

Any searcher who needs help later to process the events of the day should ask for it, he said.

Some members of Taeva’s family attended the meeting in the park, thanking people for all they had already done and for the massive effort on Wednesday. One offered a prayer for the searchers, asking for their safety and hoping they could find her. The Valley Baptist Church — the family’s church home — brought lunch for the searchers at noon.

Counselors at Lockwood School made themselves available to students, and had counseled about 15 students. The counselors have also met with another group of about 20 people and spoken to several on the phone, attempting to help students.

Taeva’s friends gathered for a candlelight vigil at Lockwood School Tuesday evening. A benefit fund is accepting donations at www.gofundme.com/taevahawkins