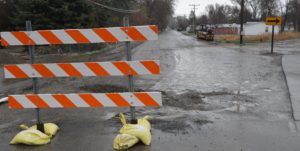 Hiller Lane, Shown here, is one of 28 Lockwood streets that will be improved this spring after the installation of the second phase of community’s sewer system. (Jonathan McNiven photo)

LOCKWOOD — Some 28 streets in Lockwood will be looking rather spiffy this spring, as construction crews begin reconstructing them following the installation of the Phase 2 Lockwood Sewer System. In some cases, in addition to sewer line, new water lines and new gas lines were also installed.

The Lockwood Water and Sewer District is required to repair roads which were dug up in the process of installing the sewer line, but in order to mitigate the rough roads that often result from the patch work reclamation, which is the extent of reconstruction that the sewer district is allowed to pay for, Yellowstone County is paying to do the complete street.

So rather than just one lane being reconstructed and just for the length of the sewer line, the entire length of a street and its full width is being re-paved. The County Public Works Department has dedicated $785,555 of its budget to the project, according to Public Works Director Tim Miller.

Some streets, such as Rosebud and Hilner Lanes, are getting new base work and 3 inches of full-width pavement. Other streets are getting a 2-inch overlay. Some streets involved include Maier Road, Lantana Drive, Rolling Meadow Drive, Suburban Drive, Rock Hill Drive and Peters and Sunrise streets.

Piccolo is also getting a new 3-inch pavement, while 2-inch overlay will be placed on Sunrise, Red Oak, Wanda Lane, Nightingale Drive, Lauretta Drive and Rockwell Street. Some streets are being refurbished with gravel.

In the process of rebuilding the streets, said Miller, they discovered that there were three or four culverts that needed to be replaced, which were not anticipated in their initial plans. Replacing them added another $60,000 to $70,000 to the county’s total cost.

The extensive rebuilding of streets in Lockwood follows a resurfacing of Old Hardin Road, done by the county, following the completion of the first phase of the sewer project, which cost $559,809.