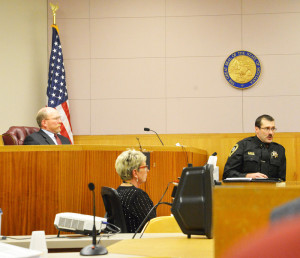 Kevin Evans, undersheriff of the Yellowstone County Sheriff’s department, testifies about officer training on Tuesday during the coroner’s inquest into the shooting death of 28-year-old Loren Simpson. At left is Park County Coroner Al Jenkins, who presided over the inquest. (Judy Killen photo)

by Judy Killen-originally published in the weekly Yellowstone County News

BILLINGS — Loren Simpson was driving a stolen SUV, had a near-lethal blood level of methamphetamines and a bottle of whiskey in his coat sleeve when he was shot and killed by two Yellowstone County sheriff’s deputies in January 2015.

After a two-day coroner’s inquest, a jury on Wednesday determined that the deputies were not criminally liable for his death.

After deliberating for just over half an hour, the jury of four men and three women returned a majority opinion that Simpson’s “death was not occasioned by criminal means,” said Yellowstone County Attorney Scott Twito.

A coroner’s jury has a narrow focus, Twito said:

“What really is important is, under the laws of our county and our state, did a crime occur in this officer-involved shooting?”

In this case, the jury determined that a crime did not occur.

Twito pointed out that a coroner’s jury’s verdict is advisory, but added, “in my practice, I give great deference to the jury and their findings.”

In this case, the jurors were active and engaged, he said, asking witnesses dozens of questions during the two days.

“They asked a tremendous amount of questions today,” Twito said.

Park County Coroner Al Jenkins presided over the inquest. A coroner’s inquest is a standard procedure in officer involved shootings.

Yellowstone County sheriff’s deputies Jason Robinson and Christopher Rudolph shot at Simpson, a 28-year-old Lockwood resident, on Jan. 8, 2015, as he drove the stolen Ford Explorer SUV toward their patrol car on a slippery, snow-covered rural road south of Huntley.

The deputies were near the end of their 12-hour shift. They had spent time throughout that day pursuing the stolen SUV and investigating complaints of suspicious activity at several locations.

By late afternoon, they were trailing the SUV on White Buffalo Trial, near Justice Trail, where a burglary had been reported. They were piecing together evidence that pointed to Simpson.

Victoria Callendar, a deputy county attorney who questioned witnesses during the inquest, told jurors that Robinson “had some knowledge of Loren Simpson” and suspected he might be the driver of the SUV, and they had searched for the vehicle throughout that day.

When they saw it in the area where the burglary had been reported, they saw it as more than “simple coincidence,” she said.

Two high school students testified that they saw the unfamiliar SUV when they were coming home from school. One boy went to his home and watched through binoculars as the SUV drove toward the deputies, each of whom was standing behind an open car door.

“I saw them draw their handguns… and fire at the guy,” one boy said, adding he was surprised that they shot at him. He heard about eight shots, he said. The SUV veered off the road and “blew up a lot of snow,” he said.

The other boy, who had earlier helped the deputies get their patrol car out of a snow drift before driving home, described how he had seen the SUV drive around his neighbor’s property at the top of the hill before driving back down to the site where deputies were waiting on the road.

Both boys said the Ford Explorer caught their eye because few people live in the neighborhood and they knew what all their cars looked like.

Jurors saw “dash cam” videos from deputy patrol cars during the inquest. One video showed the SUV approaching the car driven by Rudolph and Robinson. The other showed a third deputy arriving at the scene moments after the shooting, and working to preserve evidence at the scene.

Dr. Thomas Lynn Bennett, a pathologist who performed an autopsy on Simpson, said he suffered three gunshot wounds, one of which would have been almost immediately fatal. That wound was a bullet from a .223-caliber rifle that struck the base of his skull and severed his spinal cord from his brain stem.

“He was unconscious immediately and he died rapidly,” Bennett told jurors. The other two major wounds injured a lung and his liver, but might not have caused death, without the third, fatal shot, he said.

Bennett said blood tests at the Montana State Crime Lab showed 3.6 milligrams of methamphetamine per liter of blood in Simpson’s body at the time of his death.

Asked about that level, Bennett — who said he has performed more than 12,000 autopsies in his career — said, “It’s a whole lot. I think that’s the highest level that I’ve seen… in Montana.”

In fact, that level of meth is fatal for some people, he said.

“At that level, it changes your mental function,” he said.

Although Simpson had a bottle of Rich and Rare (R&R) Whiskey in his coat sleeve, there was no alcohol in his system, Bennett said.

Deputy Robinson was armed with an AR-15 .223-caliber rifle. Rudolph fired a 12-guage shotgun loaded with slugs, according to testimony at the inquest.

Throughout the inquest, deputy county attorneys questioned witnesses about the types of training new deputies receive, both at the Montana Law Enforcement Academy and on the job. New deputies are supervised and must meet several criteria, including weapons certification, before they go out on patrols alone, officers said.

A review board cleared the deputies of wrongdoing, but both resigned shortly after the Jan. 8 shooting.