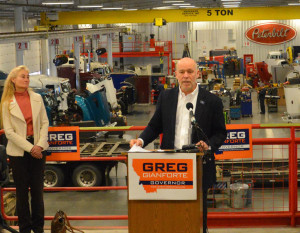 Greg Gianforte announces his candidacy for Montana governor on Wednesday at Peterbilt in Lockwood. The Bozeman Republican thanked his wife, Susan, at left, for her support at the beginning of his speech. (Jonathan McNiven photo)

LOCKWOOD — Greg Gianforte launched his anticipated campaign for governor on Wednesday, telling 70-plus people gathered for his announcement that he intends to “give Steve Bullock pink slip.”

Speaking to a crowd of local Republicans and reporters, Gianforte, a Bozeman businessman, said he intends to fight federal regulations that he believes strangle Montana businesses and called Bullock, the current governor, a “chicken” who’s failed to stand up for Montanans in the face of lost jobs and a struggling economy.

“I fell in love with Montana 40 years ago,” said the 54-year-old Gianforte. He moved here with his young children and started a business in Bozeman, which paid high wages and stimulated business growth, he said.

He said federal officials use regulations to curtail and threaten Montana jobs and resources, including timber and mining.

“They think a prairie chicken is more important” than peoples’ jobs, he said, and the current administration in Helena is “too chicken to stand up to them.”

Gianforte announced his campaign at Montana Peterbilt in Lockwood, launching a two-day swing through Montana communities. He had spent the past several months exploring a run for governor.

Gianforte said he thinks students should have more access to computer programming education and pledged to find ways to create jobs for millenials, so more young people can come home and live closer to their families.

“I’ll make a promise,” Gianforte said. “I will wage an all-out campaign to put our families back together.”

Not all students will need college degrees to be successful in the workplace, he said, but students who want such education should be able to get it. He said he would donate his salary as governor to charity and a scholarship fund to help students succeed.

“It’s undeniable that it’s not working” under the current “Bullock-Obama one size fits all” health care plan, he said. 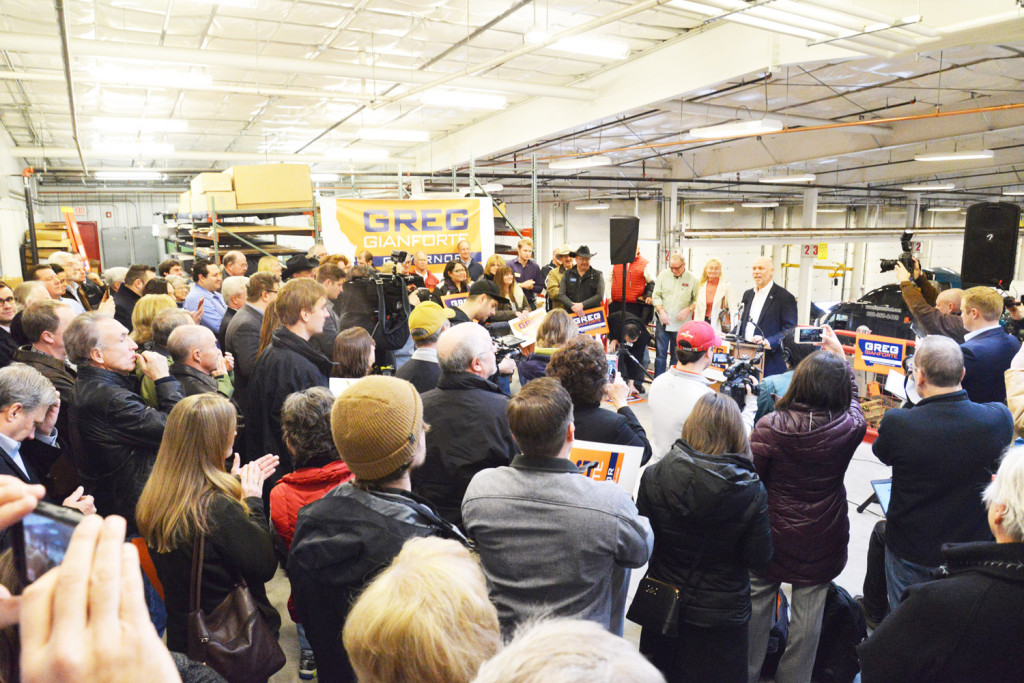 Calling him a “New Jersey billionaire,” Keenan said, “It is fitting that Greg Gianforte announced his campaign bid the day before the anniversary of the Citizen United decision. Millionaires and out-of-state corporations are trying to buy elections to advance their own agendas, and Greg Gianforte is no different.

She said Bullock is performing well as governor.

“Thanks to Steve Bullock’s leadership, Montana’s unemployment rate is down while personal income growth is up,” she said. “Bullock keeps the state’s budget balanced and maintains a $300 million rainy day fund, all without raising taxes.”