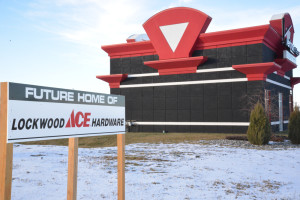 by Evelyn Pyburn-Originally published in the weekly Yellowstone County Newspaper edition of 12-4-15.

LOCKWOOD — Lockwood will become home to a new Ace Hardware store next spring. Owner Skip King said he hopes construction can begin – at 678 Johnson Lane – yet this fall. Weather will dictate construction, as well as the exact opening date, which is projected to be in May 2016.

The store will be the fifth Ace Hardware store owned by King, who has been adding to his family’s legacy of stores since he took over the business from his parents, E. D. and Joanne King, who began the business in 1987 with the purchase of the Coast to Coast store at 24th and Central.

The new store is being constructed by Dick Anderson Construction, with all local subcontractors.

Lockwood residents will welcome news that as part of the construction of the store, King will also build a sidewalk to the front on Johnson Lane, which will help contribute a portion of a future pedestrian safety project for the community. The store will also include a post office for customer convenience – another long-awaited amenity for Lockwood.

“Ace Hardware is really a neighborhood store,” said King, “and we are community-minded.”

The new store will be very similar to the Ace Hardware store at 1551 Zimmerman in Billings. It will be slightly smaller, with 17,000 square feet of space, which will accommodate all aspects of an Ace Hardware store, from lawn and garden equipment and greenhouse, to plumbing and electrical supplies, hand tools and household goods and appliances, plus maintenance and service.

The new store will employ 15-20 people. The company currently employs 130 people among its four stores. King also owns an Ace Hardware store at 4170 State Avenue and another store in Laurel.

“We are excited to be in the community,” said King, “I think there is a need for what we do in Lockwood.”

A lot of factors played into the decision to build a store in Lockwood, said King.

“We know the customers are there,” he said. “The community has doubled in population since 2000. It is the fastest growing community in Montana.”

King said that he has other plans for expansion depending on how the business grows.

He anticipates drawing business from the outlying areas of the county as well, such as Ballantine, Huntley and Shepherd – especially from the farm and ranch community.

Other business people are also interested in Lockwood, said King, who also owns the lot adjoining the new Lockwood store. He has been in discussions with national retail businesses that want to locate in Lockwood because of its growth potential. Any one of them would be an equally exciting addition to Lockwood, he said.