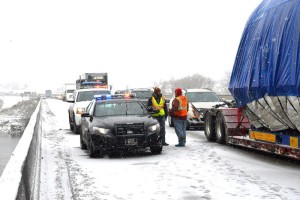 Montana Highway Patrol Trooper and others visiting while all traffic stops until the wreckage is moved off the Interstate. Traffic was down to one lane on the Yellowstone River bridge. (Jonathan McNiven photo)

A white SUV initially hit Kramer’s pickup and then he saw a semi-trailer coming towards him as he quickly exited the passenger side door due to his other door being damaged.  He took off running as he looked back to see the semi-trailer then hit the white SUV and pickup. 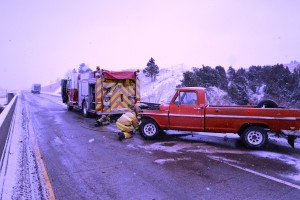 Damaged 1968 F-100 pickup truck with frontend damage due to slippery road conditions on Wednesday Nov. 25th on Yellowstone River bridge on Interstate 90. Fire fighters are hooking to the pickup in order to pull it off the interstate in order for traffic to start moving again on the Interstate.

“The white SUV left the scene of the accident with significant damage probably due to not having any insurance,” Kramer said.

Emergency personnel arrived to the accident entering westbound on the eastbound lane in order to get to the accident.  Fire personnel hooked up chains from the fire truck in order to pull the pickup truck off the interstate so that stopped traffic could start moving again.  It was reported that the interstate was closed down and traffic was at a standstill for about 30 minutes while the equipment was being removed from both lanes of the Interstate.  Both lanes of traffic were also backed up from the Yellowstone River bridge until past the 27th street exit on the interstate.

No serious injuries were reported from those that were at the scene.  The status of personnel in the white SUV that left the scene of the accident is unknown.

Slippery and snowy road conditions contributed to a slow and dreary day with many traveling on the roads for the Thanksgiving holiday season.