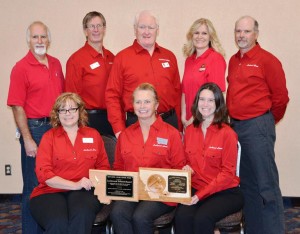 Lockwood School Board of trustees were awarded the School Board of the Year award this morning at the MSEL kickoff in Billings.  The two day conference  for school administrators was held at the Holiday Inn convention center with the school representatives across the state attending.

Stay tuned for full coverage and details in next Week’s Yellowstone County News as the newspaper has already gone to press this week. 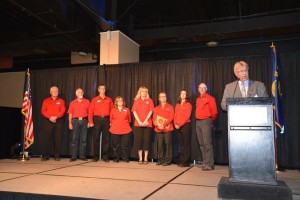 Lockwood School Board members waiting in the background to receive the MSEL’s to award of school board o the year. Rick Duncan of the SAM (School Administrators of Montana) President is recognizing all the new things this year that have already happened at Lockwood School.

Article that was published in the Yellowstone County News on 10/23/15 issue.

And board members also won the Golden Gavel for the 26th year in row.

“I strongly believe that our trustees have done an outstanding job in each of the three criteria areas that this award addresses,” Novasio wrote in his letter to the School Administrators of Montana.

The criteria areas are board policy, infrastructure for learning and teaching and innovative educational programs. Novasio pointed to the board’s review and revision of all board policies and handbooks over the past year during several months of working with the Montana School board association as a proactive approach to school board policies.

He also cited the board’s work on building improvements, including some that focus on student safety, and equipping all school buses with seat belts.

“It truly is in Innovative and Education Programs area where Lockwood’s trustees shine,” Novasio wrote, citing the district’s addition of intervention specialists in the elementary and middle schools and the district’s pre-kindergarten program “that targets our most at-risk students before they are even old enough to attend public school.”