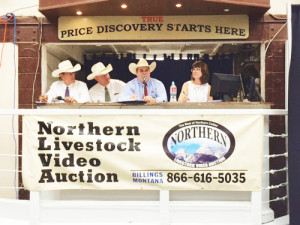 Brandon Neely, 2015 World Livestock Auctioneer Champion, took his turn on the auction block at the Northern Livestock Video Auction’s Summertime Classic Sale at the Billings Livestock Commission July 20-22. Neely defeated 29 other contestants to win the World Livestock Auctioneer Championship in Clifton, Texas. During his year as champion, Neely will travel across the United States, with appearances at Livestock Marketing Association member markets and industry events. On the auction block, from left, are Roger Jacobs, Joe Goggins, Brandon Neely and Linda Goggins. (Photo by Dennis Ginkens.)

BILLINGS — The annual Northern Livestock Video Summertime Classic Sale, at the Public Auction Yards in Billings on July 20-22, was the biggest sale ever – selling over 100,000 head of cattle with receipts in excess of $150 million.

“It was very favorable for the market that we have had — very much so.”

The two-and-a-half day sale had no live cattle. It was all video with buyers able to make bids over the phone or over the Internet, but many buyers come to Billings to buy in person and some producers come to observe. How many people are drawn to Billings by the sale is hard to say, said Bill Cook, but the Vermillion Ranch in Shepherd hosted more than 700 people at a steak dinner.

Northern Livestock has been conducting video sales for 12 years now. They conduct four sales a year, but the Summertime Classic is the biggest. It draws cattle from throughout the region. Representatives from other markets – including Great Falls, Lewistown, Glasgow and Chinook — bring consignment agreements to the sale from throughout Montana, Wyoming, Idaho, Washington, Utah, Oregon and the Dakotas. The representatives are paid a percentage of the sale.

Buyers pay $100 a head at the sale with the balance due at delivery sometime in the fall. They sold 600 lots varying from 75 to 1,500 head of cattle, predominantly calves, yearlings and bred cattle.

“The idea is to sell on the ranchers’ terms,” said Cook.