Originally published in the Yellowstone County News on July 31, 2015 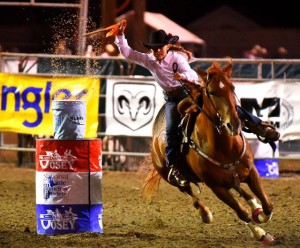 Carter Howell competes in the first round of flag racing on her mare, Fancy, at the Little Britches National Finals Rodeo. She won the first go-round and emerged as the world champion in the event.(Courtesy photo, Jennings Rodeo Photography)

Carter, who’s 9 and the daughter of Robert and Jami Howell, won the flag racing title at the National Little Britches Finals Rodeo in Pueblo, Colorado July 20-25.

Carter was one of four young contestants to go to the national finals and the only one who placed.

“She had a pretty spectacular week,” said Carter’s mom, Jami. Carter won both the flag racing and the barrels in the first go round, and placed fourth in the barrels and fifth in the flags in the second go round.

“Carter made it back to the short go in three events on three different horses,” Jami Howell said. “Barrels on Tilly, Flags on Fancy, and Poles on Rooster, a 23-year-old ranch horse that had never been used in rodeo until he became Carter’s horse at the age of 19.”

Only the top 15 made it back in each event, “so it was quite an accomplishment to make it back in three,” Howell said.

Carter came into the Short Go leading the average in both barrels and flags, Jami Howell said, but was challenged by a few errors.

“Barrels were the first event and Carter would have run the fastest Little Wrangler barrel time of the whole finals,” Jamie Howell said, “except she came in too wide on second and knocked down the barrel, adding a 5-second penalty and costing her the win. Her next event was poles, where she ended up breaking pattern by pushing too hard, resulting in a no time.”

Carter’s last event in the short go was flags with her little red mare Fancy, an event that Howell said “has cost her more all-around wins from no timing the event by either not getting the flag in the first bucket or missing the flag in the second bucket. She has almost never had three successful flag runs in a row.”

“But Carter never gave up,” Howell said. “She came out, and ran her best time of the week, and placed third in the round, plenty fast enough to win the average, and win the World Champion title.”