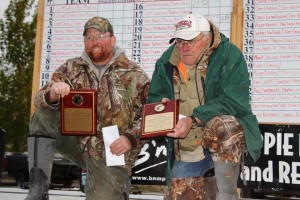 The week leading up to the 2015 Yellowstone Challenge set up beautifully.  Pre-fishing was “off the hook”, coupled with 80 degree temps and bright sunny skies.  Everything seemed to be setting up well for the fisherman but then came the dreaded cold front.  80 degree temps were replaced with near freezing temperatures and a dash of rain, however, the frigid temps couldn’t hold back these hardcore Montana Catfishermen from competing in the first Montana Cats event of the season.  The drastic shift in temps threw many teams for a loop but others adjusted on the fly and put together some nice baskets of Yellowstone kitties.

Leading the charge was veteran anglers Gary and Spencer Cantrell out Billings.  This local duo posted an impressive basket of 29.35 lbs, good enough to bring home the top prize.  “We’ve never even placed at this tournament before” Gary explained on stage.  Their hard work and perseverance paid off big this year.  Cut sucker minnow and an early bite blew away the field by almost 2lbs, not a bad way to make your debut on the awards stage.  Nipping at their feet was another local duo, Kevin Howie and Travis Kennedy of Billings. Their 27.27 lb basket helped propel them to runner up finish (after a fifth place finish last year) and was helped in large part by hauling in a 10.70 lb pig, which was also good enough for big fish honors.

Randy Franco and Nick Fortier of Billings have been making the rounds on the circuit since last year and it appears their hard work and dedication is paying off.  Randy and Nicks basket of 24.64 lbs. was good enough for third place and are early front runners for 2015 B’N’M Angler of the Year.  Another veteran crew of Matt and Zac Bushman broke through this year with an impressive basket 23.12 lbs., and a fourth place finish.  Rounding out the top 5 were some familiar faces in Blake and Lidsey Gauer of Park City with 22.95 lbs.  Blake has two top 5 finishes for Angler of the Year in 13’ and 14’ and doesn’t appear to be letting up one bit.  Congrats to all 60 teams that competed in this year’s event.  It was truly a battle of will and wits.  Once again the 9th Annual Yellowstone Challenge lived up to its name……CHALLENGE.

The Montana Catfish Association would like to thank the following sponsors for their continued support.  Without you, none of this would be possible.  A huge thanks goes out to: Pryor Creek Bar & Café, Minnow Bucket, Whites Bait Company, Riverside Marine & Cycle (Miles City), KR Rauch Company, All Awards (Lewistown), Postnet, Cat River Anchors, Briggs Distributing, Cabelas, Express Print Pack and Ship, Whisker Seeker Tackle, B’N’M’ Poles & Carquest.  See everyone in Glasgow for the second leg of the Montana Catfish Association tour at the Milk River Classic on June 6th.  The chase for the 2015 B’n’M Angler of the Year is coming in hot and it shows no signs of slowing down.