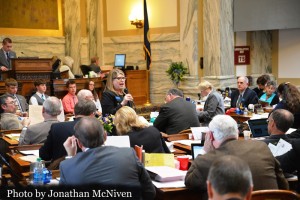 Representative Debra Lamm making a “blast motion” on the Montana House Floor in favor of Senate Bill 107. Then on third reading last Tuesday, voted one more time as other representatives changed their vote on Third Reading.

Lockwood Elementary School Districts only hope of expanding into a possible high school district died Tuesday on the Montana House Floor on a 52-48 vote during 3rd reading.  The multi-resurrected bill has been through one of the most crazy paths to become law with the many votes that have been taken against it this session.  As the 64th Legislative Session is about to wrap-up, little time remains for any forward motion on the Lockwood High School Bill.

The bill is considered dead at this point but could possibly come back to life again if any reconsideration of the bill is taken again before the end of the session.  If Senate Bill 107 is reconsidered and passed on 3rd reading, it would then move to the Governor’s desk for final decision.

Senate Bill 107 was sponsored by Senator Taylor Brown of Huntley.  It passed through the Senate, then passed all but one vote in the House in order to be placed on the Governor’s Desk.

3 democrats and 4 republicans changed their votes on third reading, including Representative Nancy Balance, who voted to blast the bill to the house floor and then voted against it on 3rd reading for it to die.