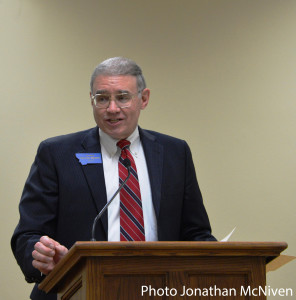 Looming another improbable hurdle, Senate bill 107 came before the House Appropriations Committee Thursday morning in another scrutinizing and comb picking hearing.  According to Senator Brown, 12 different committee votes this legislative session have gone towards Senate Bill 107 in 5 different hearings and many hours of crafting the legislation.

Proponents of SB107 talked about a few policy issues but mainly on the fiscal impact of the bill.  Tax base impacts to the transition of a possible high school district were among discussion of the looming legislation.

SB107 would specifically affect Lockwood, Missoula Hellgate and East Helena school districts as these communities current have more than the threshold of 1000 students or more in order to take advantage of the legislation.

Jim Standart, Proponent for SB107, says that each mill is $1.31 on a $100, 000 house in East Helena. In regards to the general fund mills in billings and Lockwood, Billings school district would start at 4.1 mills and then go to 2.8 mills and finally to zero.

Opponents talked about the underlying cost to the bill, from building reserve funds and technology funds to bonding funds of the bill.  In addition, the County Superintendent would not have enough time to divide up the assets.  Opponents also discussed the legal fees and cost of a lengthy appeals process.

Closing arguments in the hearing included change, creating certainty, and opportunities to all students in Montana.

Executive Action on Senate Bill 107 in the House Appropriations Committee will probable be taken Friday morning.

← SB 107 passes by 1 vote, another hang up pending
County will test emergency alarms and sirens →