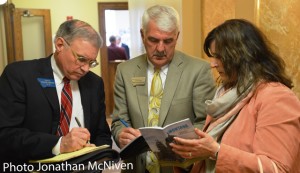 The Montana House narrowly passed Senate Bill 107 yesterday on a slim margin of 50-49 in the Montana Legislature.

The vote came after lengthy discussion on the House floor with opponents and proponents who discussed the merits of the bill.  From funding to the mechanics of the bill, opponents were concerned with the timeline to allocate the separation of assets to who doesn’t get to vote.  Proponents of the measure talked about identity, more possibilities along with local control.

Representative Mike Miller  was absent on the House floor at the time of the vote but later posted on Facebook/twitter that he supported the bill and would vote for the bill on third reading which would make the vote pass by 2.

A phone call to the Minority Leader Chuck Hunter was placed to see if the vote against the measure was a party-line gesture due to the unions and the Montana Education Association being against the measure but no comment or return call was received at the time of this article.

Even though Senate Bill 107 passed on Second Reading, it was referred to the Appropriations Committee as it had a fiscal note of over $25,000 attached to it.

After counting the votes from the House Chambers yesterday, it appears another hang up for the bill will be getting it out of the Appropriations Committee as the majority in the Committee voted against the measure during the House floor hearing.

Of the 12 republicans in the committee, 9 voted for the measure with Rep. Don Jones of Billings, Kenneth Holmlund of Miles City and Brad Tschida voting against it.

Republicans, who are the majority in the House, were asked if they sent the bill to Appropriations to die.  House Majority Leader Keith Regier said that it was not sent there to die but to go through the regular procedure for any bill that crosses the threshold of more than $25,000.

When asked if SB 107 does not make it out of committee, would leadership and the Republican caucus take up the bill as a possible “Silver Bullet option”? Majority Leader Regier stated that is an issue they would have to consider at a later time but have not really taken any stance on that as of yesterday.

It was reported in the Lockwood School Board meeting about a year ago that Governor Steve Bullock supported the bill but then clarified his stance on the bill in January 2015 with Yellowstone  County News when he visited Lockwood School that he wanted to let the bill go through the process and then consider signing it, vetoing it or just let it go into law by not signing it if it gets to his desk.

Yellowstone County News reached out to the Governor’s Office again yesterday regarding their stance now with the bill.

Communications Director Dave Parker said in the email, “he (Governor Bullock ) prefers not to comment on legislation until it hits his desk and he has an opportunity to review the bill and confer with his advisors, so he does not yet have a position on SB 107.”

The hearing on SB 107 will be heard on Thursday morning in Appropriations Committee.