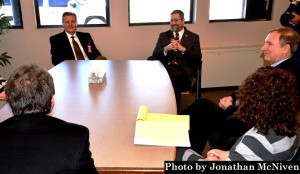 By Judy Killen – Published in the Yellowstone County News.

A Senate bill that would allow Lockwood and two other Montana school districts to build high schools has passed the Senate on second reading.

Meanwhile, Lockwood Superintendent Tobin Novasio has fired back at an editorial in the Billings Gazette criticizing Senate Bill 107.

The bill, sponsored by Sen. Taylor Brown, R-Huntley, passed on a 34-16 vote after an hour-long debate on the Senate floor. It passed the Senate Education and Cultural Resources Committee last week on a 7-4 vote to advance to second reading.

The bill would allow elementary districts such as Lockwood to consider expanding into high school districts and possibly eventually build new high schools.

Brown said Lockwood may never build a new high school but it deserves a chance to decide for itself. Lockwood students attend Billings high schools, and Brown said with “the Yellowstone River and a whole city in between them and their school,” students don’t build meaningful connections and that increases drop out rates.

Sen. Llew Jones, R-Conrad, pleaded for passage of the measure, although it isn’t a perfect bill.

“We cannot get this perfect,” Jones said. “We fail when we let the pursuit of perfect keep us from doing good.”

On Wednesday morning, the Gazette editorial board said passing the measure could hurt Billings District 2 by removing funding and assets that should stay in Billings.

“This is a completely irresponsible editorial by the Gazette!” Novasio wrote in an email to the Yellowstone County News.

“First, they did not contact anyone at Lockwood School to get our perspective” and the editorial is one-sided, he said. “This bill does not give the current K-8 districts anything more than the opportunity to decide for if they want to tax themselves and educate their own children.”

As for the equitable distribution of school assets called for in S.B. 107, Novasio said, “The distribution of assets just acknowledges that our taxpayers have equity in the three current high schools which our taxpayers have been funding for generations… any bonded debts will stay with all the property that was part of the district when it was voted. Lockwood will continue to pay off the SD2 high school bonds; this amounts to about 2 mills.”

“The idea that Lockwood would have more money to spend per student has such a small impact it can hardly be considered a ‘cost borne’ by taxpayers,” Novasio said. “You are referring to a 50-cent decrease for each student up to a total of 800 – basically 250 kids in this case. Either the authors did not do their homework before publishing this opinion or they are trying to mislead their readers by exaggerating the issue.

“This bill should be looked at as a ‘win-win’ for the Billings community,” Novasio said. “SD2 is currently redistricting the elementary and building new middle schools to deal with overcrowding. Eventually, taxpayers will be asked to pay for a high school – something that Lockwood is just asking for the opportunity to consider. With quality leadership this could be used as an opportunity to avoid a HS building bond, reduce class sizes and keep more kids from dropping out.

“Please do your homework on this issue. Opponents of this bill are fixated on what they see as lost funding and are using misinformation and the complexity of the state funding system to confuse the situation. They are focused on the dollars, but we just want to make sure that our kids are getting the best opportunities for success.”

Brown has called his bill the most important he’s carried on Lockwood’s behalf, promoting opportunity for local districts to make more choices.

“Our goal here is to empower local communities and taxpayers,” Brown said, “to allow them to choose to tax themselves and to make local decisions about what is best for their students, but not at the expense of existing schools or current debt commitments.”

“To take a snapshot in time, and freeze what all school districts must look like, is just not realistic, and it is not the right thing to do,” he said. “What if in the future, things change, and we need schools in different places? And how much of that decision will be decided by the local people in the affected community?”