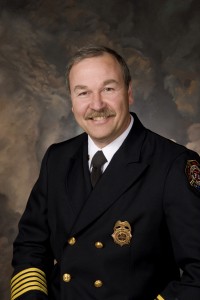 Lockwood’s new fire chief has been in the fire service though for almost 40 years. Chief John Staley began his career in Quincy, Illinois in 1976. He ascended to the rank of Lieutenant before resigning to move to Billings in 1982. John began all over again with the Billings Fire Department and served 26 years before retiring as the interim fire chief and accepting the position of fire chief for Thornton Colorado. Chief Staley has been a fire and life safety consultant to the National Fire Protection Association (NFPA). He was a subject matter expert for the NFPA in the development of the Risk Watch elementary education program and the Pre-School education program. As the Fire Chief for Thornton Chief Staley has co-written two courses of instruction for chief officers for the National Fire Academy and has another in development. Chief Staley served six years in Colorado and was Past President of the Denver Metro Chiefs as well as the current Secretary for the Colorado State Fire Chiefs (CSFC). Chief Staley is married to Gayle an R.N. and he has two grown children.

The LRFD currently has over 9,000 permanent residents along with several thousand people who commute and work within the fire district.

The LRFD is comprised of over 80 square miles of coverage area with an anticipated increase of 30,000 acres of wildland fire protection area as contracted with Yellowstone County (effective July 1, 2009).  The LRFD includes a major railway that serves several industrial sites along with several miles of I-90 and I-94 being located within the LRFD.  The LRFD protects schools, infrastructure, businesses and industry.  More specifically,  the LRFD protects 235 commercial properties and over 3,100 residences.  Many of these residences are located within significant wildland-urban interface (WUI) fire areas.

The Lockwood Fire department board of directors meet monthly on the first Wednesday night at 7pm in the Fire Hall building.