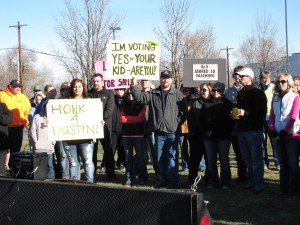 On Saturday, January 18, a group of about 50 Lockwood residents gathered together near the Lockwood First Interstate Bank to kick off the “Vote Yes for Safety” Campaign.  The rally occurred near the location where a tragic accident occurred a year ago in January.  The campaign in support of improved sidewalks, lighting and traffic will be sent out to property owners in the Lockwood school District.  The district proposal put to the voters by the Yellowstone County Board of County Commissioners will be conducted through a mail-in ballot.  It was reported that Ballots will be sent out on February 5th and due by February 25th in the Yellowstone County Court House Elections Office.

Resident Stephanie Freeze spoke at the rally and stated that she has only become involved just recently with the campaign as she and her family have been grieving since the passing of her son but now is the treasurer of the Do it For Dustin Campaign.  A facebook page has been set up for the campaign called “Do it for Dustin”.  Volunteers went door to door after the rally to inform residents of the effort.

The following is a courtesy video from the rally.