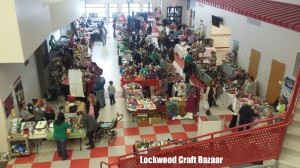 The 2013 Lockwood School Craft Bazaar drew many visitors and Vendors for this year’s event.  Coti Widdicombe, who is in
charge of Community Education at Lockwood School, stated that there was a good stream of visitors and consumers through out the day. The craft bazaar is an event that is put on by the Lockwood School for the community which brings vendors to the school. This years event took place Nov. 16th. 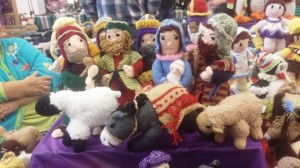 This year brought 39 vendors from the local community and surrounding area. From holiday crafts and homemade hats to lots of food were all located within the building.   As this was the first year to have the craft bazaar at the Lockwood Eileen Johnson Middle School, Coti was pleased with the turnout and is already looking forward to next year.  There were even visitors that had grown up in Lockwood that live out of town and had come back to visit and were pleased with the progress.

The Craft Bazaar has been going for over 20 years. It was originally put on by Lockwood Ladies Lions Club, then the school started doing it over 15 years ago. This was the first year it was held in the Eileen Johnson Middle School Commons area. Janet Bessaparis made some Nativity sets and they were very popular this year. Coti said, “we’re hoping to have this event grow each year. Eventually I would like to see us have so many vendors that it filters in to the gym!”

← Public Hearing on creation of Special District
Did You Know… →