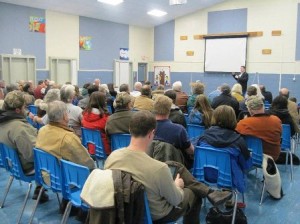 Image of Lockwood blue room where public meeting was held by Yellowstone County Commissioners on June 11, 2013

Residents gave a green light indication to county commissioners last week in a public meeting held June 11, 2013 at Lockwood school for sidewalks, pathways & lighting.  The proposed SID (Special Improvement District) option was put to the public present with real-time results for county commissioners to evaluate on the spot.  Over 30+ people used keypad clickers to vote on a series of questions regarding their interest in whether a said district should even be created.  52% of those voting approved of the measure put forth by county commissioners for pathways and sidewalks while 25% supported pathways only.  About 20% of those present opposed the creation of a district completely.

Candi Beaudry, who is the Director of the City-County Planning Department, said that 10 mills would cost a homeowner of a property value of $100,000 about $12.90 a year.  She also mentioned that commercial properties would be a little more.   As for how much those present would be willing to pay? It was a mixed bag with 32% that would support a levy of up to 10 mills while 29% said that they would be willing to support a mill levy up to 20 mills and 18% said they would support up to 30 mills.  However, 21% percent of those present and voting said that they oppose any mill levy at all.

County Commissioner John Oslund, Bill Kennedy and Jim Reno listened to resident’s questions and concerns for the proposed district.  When asked about the priority of improvements and location; residents chose the General area of Old Hardin Road and then other streets like Beacraft and Piccolo Lane coming in as secondary priority locations.  When asked about a time frame to vote and cost; Yellowstone County Elections Administrator Bret Rutherford said that a special election would cost about $1/person compared to combining the cost with a general election.  Residents chose the general election of 2014 compared to a special vote election as it would cost more money to produce and conduct a special election.

It was said that if the SID district Is created, it will be Lockwood residents who help organize, design and plan the pathways, sidewalks and lights within the Lockwood area.  The proposed district will run as does other operating districts within Lockwood like the Fire, Water & Sewer, Irrigation and school district.