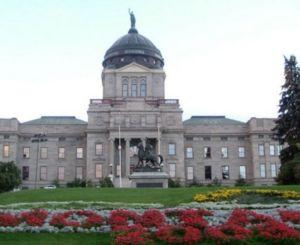 Montana Governor Steve Bullock reacted today after the Montana State Senate broke down communications between parties as democrats tried to use a procedure which is called a “A call of the Senate” in which all voting and speech stops and ceases until all members or Senators of the Senate are present or accounted for.  It appears that democrats, who were not happy about certain ballot initiative bills that were being voted on third reading, tried to halt progress by a “call of the Senate” procedure but were not recognized before the third and final vote today.

Today was the final day for revenue bills and referenda bills to pass the Montana Senate and House or fail the legislative process due to failure to meet the deadline.  In an attempt to halt voting and request a “Call of the Senate” by Senate Democrats, the Senate went to third reading before recognizing the “Call of the Senate” motion to locate an apparent missing Senator Shannon Augier who apparently went back to Browning for the weekend.

Governor Bullock had this to say about the events that took place today.

Today was a disappointing day for the State of Montana.

Since I was sworn in as your Governor, I’ve sought to change the tone in this building. In my State of the State address, I asked the legislature to “act in a manner that we’re not ashamed to have our kids watching, because they are.” I won’t let my kids watch the news tonight.

I’m saddened by what we saw today – it’s worse than Washington, DC. I’m not embarrassed by men and women demanding a right to speak – I’m disappointed by those who denied it.

Today, we saw elected Senators, people who have been entrusted by their neighbors to represent them, prevented from speaking – because they were trying to speak for those who are too often silenced. (Find complete response by Gov Bullock at link below)

For complete links and info on Montana State Senate Chaos and info, please visit the link.