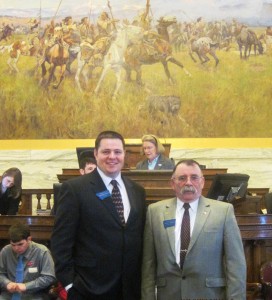 HELENA, MT—In a smooth, acrimony-free floor session, the Montana House of Representatives passed a state budget this week. Known as House Bill 2, the bill passed 100-0 with no amendments to the entire bill in record time.  This has never happened in the entire history of the Montana Legislature. It is reported that the only other time that something like this happened was in 1947 during WWII when a special session was called and after some amendments were acted on.  So this is truly historic in my opinion!!

As a member of the majority party in the House, I’m pleased with the leadership we chose last fall for this session and here is another example of the great leadership we have on both sides of the aisle in working together to work together for Montana.  The foundation for this type of success started the day after the last election once and after we elected our leadership last November.  Then the Leadership chose the Chairman, Vice Chairman, committees, staff, etc for this session.

Our very own Representative Duane Ankney, who was assigned as the Chairman of all the Appropriations Committees, is one to also give credit to as he oversaw each subcommittee and their Chairman as well.  As this is his 4th term, It’s my humble opinion that we as residents from House Districts 43 and 44 have something to be very proud of as well as the rest of the Montana.  It’s not over but the fact that we were able to send HB2, the states budget, to the Senate with a unanimous vote sends a message to the senate that we with a 100-0 vote can work together.  We don’t agree on everything but respect each other to work together and I’m proud and honored to be part of it.

Speaker of the House Mark Blasdel released the following statement:

“This is exactly the kind of session we’ve been striving for from the beginning: More work and less politics. Neither side wants to waste the people’s time with speeches and bickering. We respect the work of the appropriations committee.

If you add all funds, right now this budget is less than 2 percent over the last biennium, which is less than the rate of inflation. Members of the appropriations committee – from both parties – did good work.”

Bipartisan cooperation doesn’t mean agreeing on everything. It means a focus on results, rather than on scoring points. That’s what we’ve done today. More work and less politics.

As for other updates, House Bill 437 had it’s hearing last Monday in the Senate that I carried on behalf of the Yellowstone County Commissioners that would allow some flexibility to county commissioners throughout the state in creating Special Improvement Districts that would include sidewalk and lighting improvements as well as biking and walking trails where the ultimate vote is to the citizens.  Hopefully, this requested bill will allow the opportunity to get our children, family members, coworkers and neighbors off the roads as well as improve our communities where needed.  I want to thank those who came and testified on behalf of the bill and took of their time, money and energy to share their support.  Only time will tell for the end result of this legislation.  I hope it benefits that Lockwood area.

Once again, thank you for the opportunity and honor of representing you in Helena from the areas of Lockwood, Briarwood, Blue Creek and parts of Huntley.  Please continue to let me know if there is anything I can do by either contacting me by phone at 406-672-5941 or by email at jonathanmcniven@gmail.com.

Representative Jonathan McNiven is serving his 2nd term in the Montana House of Representatives in House District 44.  Rep. McNiven is currently assigned to the Business & Labor, Education, and Local Government Committees as well as assigned as Vice Chair of the Ethics Committee for the 63rd Legislative Session.